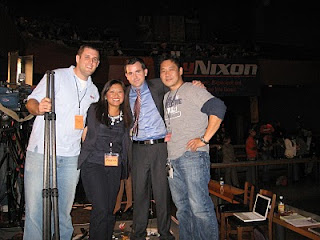 In a post on her blog, KSPR reporter Michelle Sherwood, who worked with Dave Catanese at KY3 says her goodbyes to the talented political reporter, who will leave the station at the end of the year to work for Politico:

Though the news hasn't really sunk in, we are so excited for Dave! He has so much of the "it" factor... not as a political reporter but simply as a damn good person.

randy, do you really spend all that much time watching television and surfing the internet? How can one person actually know and care so much about local television reporters? Is it just an obsession you can't help?

Take a break. Go for a hike on a cold day in the woods...chop some wood...go to a park and watch some kids play...go to church...on a nice day sit on the backporch and listen to the birds singing and flitting in and around the trees and bushes...

Read a really good book...maybe a classic or a Zane Grey..

these reporters put their pants on one leg at a time just as you do...they don't wear wings...they aren't any smarter or better than anyone else...they just read well and have nice teeth...they aren't doing any better job than many other people...I'll bet your dad is as smart as they are...he's just smart in different subjects...

I mean this sincerely, Randy....you seem to be sinking further and further into a place you really shouldn't want to go...

I don't know what your problem is with local television reporters, but there is an interest in them and what they do. As for your other comments, I spend a considerable amount of time reading, am heavily involved in activities at my school, do a considerable amount of non-Internet writing, including books and a weekly newspaper column, and I am in a band that performs and practices on a regular basis. Politicians also put their pants on one leg at a time and I spend far more space writing about them than I do about local television and newspaper personalities. If people were not interested in reading about the media, I would not be writing about it.

Eli - I checked out your stuff on the internet...enjoyed seeing pictures of your eighth grade class trip to Chicago...glad to hear eighth graders get such nice end-of-year trips...

Kids do love to take silly pictures on their outings...but you need to brush up with your camera work...lots of other eight graders do a much better job.

NOW HE had perfect teeth and the whitest teeth I've ever seen on a person.

But I can't remember his name.

All jokes aside, there wasn't a designated political reporter before Dave. He created that position for himself. Dave started out as a general assignment reporter and kept plugging away at politics. He asked our executive producer (now the former KSPR News Director) to help him reach more people-- the blog. Then, it grew. If I had my guess, there will likely not be another political reporter after Dave. The position will likely go away unless someone is as passionate about politics.