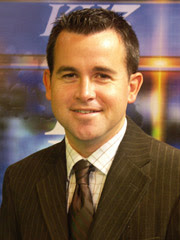 Southwest Missouri's political reporting has been top notch for the past few years and the primary reason for that has been a couple of reporter/bloggers from Springfield media outlets.

One of those reporters, Dave Catanese, is moving on to the big time, something he richly deserves. Catanese who has made the KY3 Political Notebook, a must-read over the past few years, is going to work at Politico. While reporters for local TV stations are often derided for the lack of substance in their reports, that label never stuck to Catanese. He gave KY3 viewers and his blog readers a window into local, regional, state, and even national politics, that was light years ahead of the work of other Missouri television political reporters.

In his farewell, Catanese relayed some good news:

To be clear, I'll still be covering Missouri politics, just at a different venue, and also other 2010 hotspots. But you can bet our 2010 U.S. Senate race and top U.S. House contests will get my fair share of attention in my new assignment.

As for my beloved KY3 Political Notebook, details are still hazy for its future. (I hope they become clearer in the weeks ahead.)

But I'll be reporting and blogging through the end of the year, so if you're out there and got something -- call me with a going away scoop!

Good luck to Dave Catanese. I know there will be many southwest Missouri readers who will make Politico a regular stop to continue following his rich reporting on Missouri politics.

I mentioned two Springfield media bloggers. The other one, of course, is the hard-working Chad Livengood, who has broken one major story after another for the Springfield News-Leader. How long is it going to be before one of the national media outlets latches onto Livengood?
Posted by Randy at 7:05 AM