R-8 Board to C. J. Huff: We're not paying extra for your travel, lodging 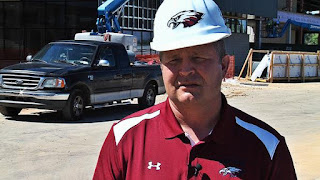 A few moments ago, the Joplin R-8 Board of Education voted against paying the district's bills.

In something I can't remember seeing in 39 years of covering board meetings, the board voted 4-3 not to pay the bills, with board members Debbie Fort, Jennifer Martucci, Chris Sloan, and :Lori Musser voting with the majority and Board President Jeff Koch, Sharrock Dermott, and Lynda Banwart voting to pay the bills.

The problem was solved quickly with the removal of one bill that particularly upset board members- $218.54 to pay for former Superintendent  C. J. Huff to travel to Kansas City and pay for his lodging as he worked with the district;s law firm to prepare for the $6 million countersuit filed by the P1 electrical contracting firm of Lenexa against the district.

According to the lawsuit, the district owes the money because of extra costs associated with Huff's unsuccessful push to get Joplin High School opened on time in August 2014.

The problem the board had with the $218.54 was spelled out by board member Debbie Fort, who participated in the meeting through a phone/computer hookup.

Fort was referring to the $50,000 Huff received as part of his severance package. The $50,000 was referred to as Huff's payments for serving as a consultant, but on the day Norm Ridder was introduced as interim superintendent, Koch made it clear that Ridder would not be consulting with Huff and that the $50,000 was to cover expenses for Huff to help prepare for the various lawsuits that he incurred, including the P1 action.

The answer that board attorney Norman Rouse gave to Fort did nothing to address her concerns. Rouse said the $218.54 was to cover one night at a motel and was a trial preparation expense.

When Fort pressed the issue, Rouse forgetting that he is there to advise the board, not tell it what to do, said, "I'll be glad to explain my rationale (for approving the expenditure), but it really needs to be in closed session."

After that, the four board members voted to reject the bills. After a motion was made to pull the Huff reimbursement from the list, another vote was taken and the bills were paid by a 7-0 vote.

Finally - somebody said "NO" to Huff. They got it right; he was paid in advance for answering the lawsuits.

Sweet ! Rouse overreaching, Fort nailing the cold hard brutal facts, followed by a failed vote, BAM ! Revote, and then consensus! Concerned about the Koch vote though ? Somebody has sum 'splainin' to do on that point. Besides, Motel 6 is only $89.00 in that neighborhood !

There were a half dozen more that should have been axed.

Way to go, Debbie Fort! You are 100% correct. Huff has already bilked patrons enough, and has been given more than enough. Bohoo, Huff has to spend his own money to spend one night in a motel. Welcome to the real world. And really, $218.54 for one night??? He could have stayed in a $125 room, but noooo, he's too good for that. Joplin is DONE paying you for nothing, Huff. Deal with it!!!!

Thanks Deb, Jennifer, Chris, and Lori, for sticking to your guns and refusing to pay for that ridiculous motel bill. Suck it up, Huff. Your gravy train has pulled out of the station!!!!

So it was rejected then turned around and paid??

Koch needs to chair meetings,not make motions and not give long ramblings about his decision process.Otherwise thank goodness the will of the voters is being carried out...

So it was rejected then turned around and paid??

When it is a small board, each member has the same rights to bring motions. I agree that there was too much discussion. They should have just cut it and been done.

11:57 - The group of bills including Huff's expense was rejected. After the Huff expense, that was questioned, was removed the remainder were approved.

Even now CJ is wasting tax dollars. Is there no shame at all in that man? I guess not. I hope the Board stands firm on this one. Old Norman Rouse is still loyal to his former boss though. Got to give him a tiny bit of credit for that tenacity. Now boot him out, too, and be clear of those CJ people.

I guess I don't understand what took place. I thought Paul Barr said a check had already been cut for the $218-. The BOE removed their consent from that item, but wasn't it paid? Also, couldn't the School District hire a better attorney than Mr. Rouse. I've watched most of the BOE meetings and it appears that he is very inattentive, usually leaning back in his chair or rocking furiously back and forth, fiddling with papers and generally appearing disinterested and often confused. His answers to Board questions seem to try and straddle both sides of an issue as if he's unsure of contract statements and legal questions. Can't we do better than that?

I do want to commend the board members for their open discussions. They may often disagree, but they aren't disagreeable with each other as has been the case in the past. Keep asking your questions, you're doing your job and I am grateful to you for your service to the students, parents and taxpayers of Joplin R-8.

I looked at this picture and wondered with help like that how anything got done?

This fool should have been tossed from the jobsite for being too stupid to wear his hard hat correctly.

Lol! That pic of CJ Huff is hysterical . Does he just not get how ridiculous he looks ?? I almost feel sorry for him . Almost .

Michael Dukakis in that tank anyone?