A salute to a special group of Joplin High School seniors 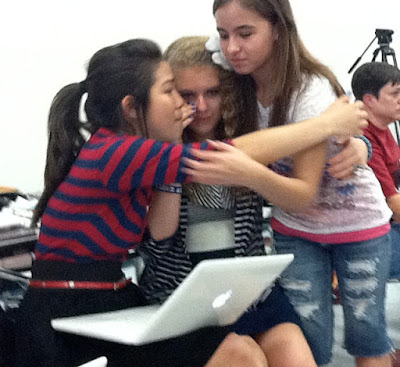 It probably will not be mentioned today, but some true heroes of the tornado recovery will be spending their last moments as Joplin High School students.

Somewhere between 25 and 35 percent of those who will receive their diplomas during ceremonies this afternoon at Missouri Southern State University are young men and women who just five years ago had their school ... and their lives uprooted by the storm that tore this city apart on May 22, 2011.

While everyone was affected by the tornado, these students ended up spending one year in a warehouse school on the far outskirts of the district. As we learned later, that should never have happened. A government scientific study said that the original East Middle School suffered only minor damage in its classroom section and even the gymnasium could have been rebuilt at the old site by August 2011.

That was not the direction that the C. J. Huff Administration or the Joplin R-8 Board of Education decided to take.

In my research for Silver Lining in a Funnel Cloud, I discovered that MODOT intended its former office building in Joplin be used as a school, most likely a place where East could have been relocated, a much better building in a more central part of the district.

Instead, the MODOT building was used as the administration building, with one of the reasons being to provide enough space for the expansion of Bright Futures.

So in August 2011, a heroic group of students, teachers, and staff found themselves in a refurbished warehouse, complete with aroma from the adjacent dog food factory.

Against all odds, and with little help from administration, this group combined to make a warehouse into a school.

Today, some of those who threw themselves into that challenge will begin their next challenge- adulthood.

When Assistant Principal Jason Weaver asked me to select an eighth grader who could promote the $62 million bond issue in a speech to a group of Joplin community leaders, I didn't hesitate to recommend Jennifer Nguyen.

Jennifer was Student Council president and co-editor of Journalism Club and far more mature in eighth grade than many of those who were attending high school at the time. Her speech was a huge success.

Jennifer and co-editor Amy Koch helped Journalism Club reach new heights this year and all of that came to a conclusion on the final day of school.

We had no auditorium, but the traditional talent show and awards assembly was scheduled in the cafeteria. Jennifer and Amy, with considerable help from other Journalism Club members, including Austen Still, Darrin Clark, and Megan Hickey, live-blogged the event on the East Middle School Roundabout website, posting stories, photos, and videos, even while the events were taking place.

It was a wonderful year, despite the circumstances, and it was those young people and their classmates who made it possible and even helped boost the spirits of the faculty.

You would have thought the eighth graders would have been ready to say goodbye forever to this pretend school, but as the assembly ended, the tears were flowing. A shared experience had come to an end.

Jennifer Nguyen wrote about that final day in her last article for East Middle School Roundabout:

School's out! It has been for about eight hours now, but I couldn't leave East without a proper closure. I know I speak for most, if not all eighth graders, when I say East will never be forgotten, especially after all the school has been through!

The class of 2016 was the first class that had the opportunity of going to the real East Middle School, not the warehouse, as sixth graders. We were lucky enough to call the site of East our home for a whole two years. Memories of the old building are still etched in the minds of many. Students still recall images of being in the hallways, classrooms, auditorium. They will be carried in our hearts forever.

Due to the damage from the May 22, 2011, tornado, East was moved to a temporary warehouse. Nobody knew what to expect of this year. The class of 2016, serving as eighth graders of the middle school, had no idea what living in a warehouse would be like; we were terrified!

As the year progressed, adaptations were made, and the warehouse felt like just another normality in our lives. Not quite our home, like the old East, but more like an apartment you would rent while being away from home. Classes were still continued. Activities were still operated. Life was as it should be. Even though we were in a new, unfamiliar building, East was with us. In our students, teachers, and faculty.

Of course with all the school work and pressure of succeeding in behavior and attitude, came the urge of students for summer to come. I remember thinking for countless hours how I couldn't wait for summer. I couldn't wait to be out of school, to just be lazy! Many eighth graders were especially looking forward to the joys of high school! The time for relaxation and vacation was definitely anticipated...and soon enough, the time came.

This school year went by like a breeze, and before we knew it, the end of school was soon approaching. This meant the end of middle school for the eighth graders, and the beginning of high school as freshmen. You would think we would be happy for summer, for a break.

Yes, we were happy, but we were also sad. The school year just went by too fast!

The Last Day Assembly soon approached and so did the time for the farewells and good-byes. The lasting minutes of the final day were filled with bittersweet moments. Shouts of joy rang through the commons area for the fact that school was finally over, and we survived! But among the joy, were many tears and remarks of sadness, of goodbye. Not only were the eighth graders bidding the year good-bye, they were also giving their last farewells to their fellow peers, teachers, and most of all, their school.

As the class of 2016 follows the path of life towards high school, I would like to take this moment to say good-bye to East not as the co-editor of the East Middle School Journalism Club, but as a student. I would like to thank East for all the great memories it has provided us with, all the things we will cherish.

Thank you to all the teachers and faculty of East. In some way, you have touched our lives, and your effect has been impeccable! I would like to give special praise and thanks to Mr. Turner, the Journalism Club sponsor and mentor, for making all this possible. Thank you to all our fellow schoolmates, the sixth and seventh graders. You have made great peers, and more importantly, friends. Thank you to everything that makes East what it is, East! As the saying goes, "East is beast!" So thank you, thank you, thank you.

Tears spring to my eyes as I close with my final bid of farewell to East. Through all the good times and the bad, we have overcome and made this school truly unforgettable. This is why I will always remember you.

Goodbye East. I love you.

It is hard to believe that four years have already passed since that group of eighth graders, who meant so much to those of us who were teaching at East Middle School, reached another turning point in their lives and became high school students.

Best of luck to all graduates of the Joplin High School Class of 2016. The road to commencement has not been an easy one, but you have traveled it in style.

(Photo- Jennifer Nguyen, Megan Hickey, and Alyssa Wescoat, share a final moment as eighth graders following the talent show and awards assembly on the last day of school in May 2012.)
Posted by Randy at 9:04 AM

This class was a great one. I was never so sad to see a group of 8th graders go from our building. I think we will see big things from these young adults in the future!