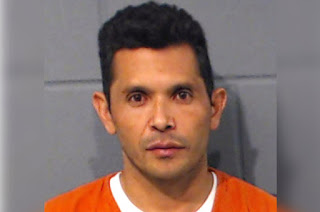 The Associated Press article about a Mexican who had been deported 10 times and who is charged with raping a 13-year-old girl on a Greyhound bus in Kansas isn't going to get any wall built, but it still should serve as further evidence that there is a problem that needs to be debated.

Not only was Tomas Martinez-Maldonado deported 10 times, but the AP investigation showed he was removed voluntarily on nine other occasions.

Nineteen times the man left the country and 19 time he returned.

All 10 of the deportations have taken place since 2010.

From the AP article:

Nationwide, 52 percent of all federal prosecutions in the fiscal year that ended Sept. 30 were for entry or re-entry without legal permission and similar immigration violations, according to Transactional Records Access Clearinghouse at Syracuse University.

“(President-elect Donald Trump) can build a wall 100 feet high and 50 feet deep, but it is not going to keep family members separated. So if someone is deported and they have family members here … they will find a way back — whether it is through the air, under a wall, through the coast of the United States,” Trevino said.

How do you feel about this issue? I want to hear your thoughts, but please do not include any racist remarks or insults They will not be published.
Posted by Randy at 10:19 AM

Lines on a map mean nothing. Eventually there will be a political and economic union encompassing Mexico, Canada and the United States, and it is long overdue. The real problem we have is that we have a population that does not distinguish the immigration solution with the drug solution. The violence infesting our border areas is directly attributable to the rising number of addicts in the United States and until we address that problem our borders will never be secure.

I believe the wall( and some prison fence) will be effective , When the illegal is jumping or going through the coast, he will be an easy target for our law enforcement officers ( sniper style)

So that will slow them down along with their tons of dangerous and illegal drugs( especially opiads). There's an easier way to unite with their family-- the family relocates to Mexico or Guatemala

Well now Harvey, I guess the true colors are finally flying. So you advocate killing people who are trying to cross the border. Your inner Nazi is showing.

So you advocate killing people who are trying to cross the border.

Just what do you suggest the last resort should be for invaders?

Your inner Nazi is showing.

You've got that turned around, they weren't in the habit of preventing people from getting in so much as captives from getting out.

Thank God that America still has Patriots such as you who are willing to gun down women and children mid river rather than allow them the ability to seek a better life or to flee the killing fields of the Mexican frontier. I am proud of you and trust that a statue of you will be built in the cotton fields back home.

So where are you going to go when this is Mexico said...

They are the very sort of scum who wouldn't dream of moving to the Third World and enjoying their "diversity" like rampant murder and rape and endemic civil war. But they insist that being good people and firm believers in "magic dirt" turning these rapefugees into Amurrikwans like they are.

When the time comes, let them and their entire families be deported to Mexifornia and not allowed to re-enter Whitetopia.

By the way, Randy, by forbidding "racist" and "hate facts" on your blog, you really just ought to stick to where only liberal scum like you have this Third-World enabling craphole to yourself and have done with it. These creatures make their own countries into Crapistans -- if they were able to make it into a place which was worth living in, they wouldn't be here. Trump is right -- Mexico sends the US their rapists, murderers, and thieves.

The United States has more than it's fair share of native born rapists, murders and thieves. In fact we lead the world in the number of folks we have locked away in our prisons. As a matter of fact I have spent the majority of my life in the Third World (not including America which is now Third World itself) and most of those countries put Whiteopia to shame. I am going to make the assumption since your knowledge of the Third World is apparently limited, that you have never worn the uniform. That, in itself, limits your insight. You really want to talk about Crapistans, then talk Mississippi, Arkansas, Michigan, Alabama, Missouri and Kansas. Trust me, your problems are not created by folks from Mexico but rather by your own narrow minded world view.

Actually, I was in uniform around the beginning of the Reagan Administration. Germany used to be so nice. Not any more, what with all the rapefugees.

Yes, American prisons are full of rapists, murderers and thieves. So are the police stations, city halls, legislatures, and Congress. They just are too big to jail right yet.

That said, this Third World Empire needs to run off foreign criminals who view this country as easy pickings. You don't like it, then perhaps your own narrow pearl-clutching "mind" needs to be deported to be amongst those you pretend to love so very much. Mississippi, Arkansas, Michigan, Alabama, Missouri and Kansas would be a better place without your kind in it. I suggest the Clinton Archipelago, i.e. those blue-state Crapistans as your place of exile.

Ponder me this, why does a semi-literate, dirt poor, Missouri rock farmer think he is a Republican and why does he think that he is superior to someone who just happened to be born several hundred south of his personal estate of scrub property?

Ponder me this 12:23pm. If some Mexican who acted as a rapist Pancho Villa and crossed the border 19 times to avoid prosecution for his crimes had raped YOUR mother, wife or daughter, would you be smarming about how we need to let them run wild in this country some more?

If you like Mexican rapists raping white children so very much, what is the difference between yourself and this Mexican rapist other than supposed skin color or pretend citizenship? What is tolerated is what is allowed and must be endured until it is no longer tolerated. The cure for this sort of situation is to stop tolerating foreign criminals who come here to commit criminal acts and those accessories after the fact traitors who enable them, 12:23pm.

You want more of this sort of thing. I want none of this allowing Mexican scum to be allowed to live among us because they are not us and neither are you, 12:23pm. The solution shall be the breakup of the Empire to where you will be run off to enjoy your "diversity" in a Mexican rapefugee camp.

It took me a while to recognize the writing style and put that together with the service in Germany but now that I know who you are there is no point in continuing the conversation. You are a racist without any saving grace and have been your entire life. No amount of logic is going to give you any pause in your march toward your White only agenda. You really are a sub standard pathetic little man.