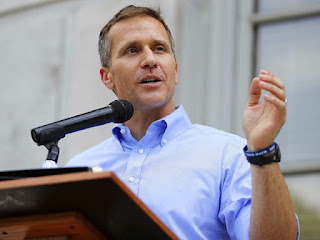 An Illinois businessman who contributed $360,000 to Missouri Gov. Eric Greitens' campaign is bankrolling the political action committee that is paying for most of the advertising backing controversial Alabama Senate candidate Roy Moore.

Moore has been under fire after a number of women stepped forward to claim he pursued teenage girls when he was in his 30s and serving as an assistant district attorney and district attorney. One woman accused Moore of sexual misconduct with her when she was only 14.

Dick Uihlein, Lake Front, Illinois, the CEO of Uline, gave $100,000 to the Proven Conservative PAC, which is backing Moore, according to Federal Election Commission documents. The contribution was made in two $50,000 chunks and makes Uihlein Moore's biggest financial supporter by a wide margin.

Even so, the money Uihlein has given to Proven Conservative PAC pales in comparison the amount he poured into the Greitens campaign in 2015 and 2016, according to Missouri Ethics Commission records.

Uihlein also contributed $10,000 to the successful campaign of Attorney General Josh Hawley.
Posted by Randy at 5:27 AM

Well, by contributing to Roy Moore's campaign after the news reports of Roy Moore's fondness for young girls comes out, makes me question Mr. Uihlein's values and judgment. Guess he thinks it's ok for a man in his early 30's to force himself on young girls of 14 to 16. This also make me wonder about the people that donated to Gov. Greitens' campaign. As the saying goes, "you are known by the company you keep".

Pox on all parties,our political class with few exceptions is rotten.

Where's any proof the Mr. Moore did anything???

Another politician on the payroll of big business. Republicans are touting that new tax plan helping create jobs, uh, unemployment is lowest it has been in decades. New tax plan will put money into pockets of working class and yet the legislatures pass laws prohibiting cities from raising minimum wage to a livable wage of $10 per hour. How can so many be so gullible as to believe these politicians BS about being there for them. Never saw so many dumb rocks in my life.
As to Moore. Look at the local headlines and notice that many of these scum bags that prey on kids/women are in all walks of life and even in the ministry of all faiths. Lots of good honest people, but one only has to see that Moore was thrown out of and not allowed into shopping mall where some of his encounters took place. Wake up and stop listening to some of the right wing pundits on the news channels.