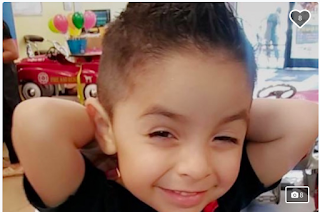 Judge Joseph A. Hensley ruled that Valdez, whose bond had been set at $150,000, will be held without bond.

Valdez also faces the original charge of child abuse or neglect. He pleaded not guilty to that charge during a video arraignment this morning in Jasper County Circuit Court.

The three-year-old was taken to Children's Mercy Hospital in Kansas City after he suffered brain injuries, facial bruising and a laceration at his home at 1502 S. Michigan Avenue November 10.

The boy died 22 days after the Joplin Police Department arrested Valdez for domestic assault at the same addres, 1502 S. Michigan Avenue, where police say the child abuse took place. The victim was the boy's mother, Natasha Michelle Bilbrey, 22, according to the JPD incident report.

Will the mother be charged with child endangerment? Abuse? Neglect?
If she hadn't left her child with an abusive person he would still be alive.
That's why this type of behavior continues, there are no consequences to the actions of neglectful parents.
It's disgusting.
Poor baby, at least he won't ever suffer again.

The mother?! That stupid apartment manager should be charged for letting this guy back on her property to kill this child after he beat up the mom weeks prior! ITS SICKENING

Who the hell constructed the apartment building in the first place?! Someone needs to take them to court for creating a location in which such misery took place

You forgot the Recorder of Deeds and the Collector's Office!

So many people are quick to put their two cents in thinking they know what happened to that little boy. I think the mother should be charged as well. She know what was going on in her home n did nothing to stop it. Here you have this kid that never been around kids barely knows how to take care of his self n you leave your 3 n 2 year old baby's with him. It probably was to much for him. Anyone in there right mind would never leave their kids with someone that don't know how to take care of kids. These wasn't kids these was baby's that needed there mother. These young girls these day's will do anything to keep a man in there home or in their bed. It's as much her fault as it is that's boys I blame both of them. People need to look in to the whole story before they want to lock this boy up n throw away the key. I don't see this kid as a monster I see him as someone that made a bad decision and now is paying for it with his life..

Anonymous 1112, that is the stupidest comment in the history of comments. The killer of a helpless 3-year-old child didn't make "a bad decision". He committed a reprehensible crime, and in a sane and just society, he would pay for his crime with his own life. I will agree that the dead child's mother - and anyone else responsible for placing the child in harm's way - should also be charged with a crime.

This is so sad. What about the extended family, aunts, cousins, grandparents father. They didn't bother to check on this baby's welfare? Where were they knowing this man was a thug and to guide and help a 22 year old mother.