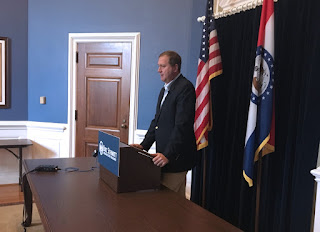 State Treasurer Eric Schmitt will meet with senior Trump administration officials on Thursday to discuss federal tax reform proposals and their potential impact on Missouri’s economy. During a press conference in Jefferson City today, Schmitt announced he will urge the administration to move swiftly toward a tax reform package that benefits working families and small businesses.

“In September I called on congress to finally fix this problem and put working families first by passing substantive tax reform by the end of the year,” Schmitt said. “I’ll be taking that message directly to Washington, D.C. tomorrow when I meet with senior members of the Trump administration to discuss this issue.”

Schmitt’s announcement comes as the Senate Finance and House Ways and Means Committees move closer toward the passage of the largest update to the federal tax code since 1986.

“Though the two chambers are still working out differences, it’s clear that a proposal rooted in the administration’s Unified Framework would mean substantial tax relief for Missouri families,” Schmitt said.

Analysis by the Tax Foundation estimates that both the House and Senate proposals would result in over 18,000 new jobs created in Missouri over a period of ten years. The same study puts the increase in income for the average Missouri middle class family over $2,400.

Schmitt also expressed support for proposed changes to 529 college savings plans like Missouri’s MOST program, which he administers. Those changes include expanding eligibility to K-12 education and apprenticeship programs, allowing for the creation of an account for an unborn child and permitting the transfer of funds from a 529 account to an ABLE disability savings account.

“These changes would make the program stronger than ever before, lower costs across the board and make this important savings vehicle available to more Missourians while recognizing the dignity of human life,” Schmitt said. “As both a dad and a 529 administrator, I fully support those measures.”

Schmitt argues passing tax reform by the end of the year needs to be a top priority for the Republican-led congress.

“Tax reform has been relegated to campaign platitudes and wish lists for too long,” Schmitt said. “The time for excuses has passed; it’s time for Congress to get it done.”

Thursday’s meeting will include members of the President’s Cabinet and National Economic Council.
Posted by Randy at 12:45 PM