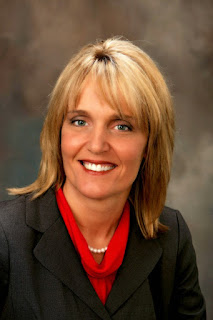 Gov. Eric Gteitens appears to have taken the final step toward firing Commissioner of Education Margie VanDeven (pictured) and replacing her with an out-of-state charter school proponent.

About an hour ago, Greitens announced the appointment of a new member of the Board of Education and it seems likely she is already attending her first meeting since a closed meeting of the State Board began at 10 a.m.

The only item on that agenda is hiring, firing, disciplining, or promoting of personnel and it is a sure bet that no one who is currently working for the Department of Elementary and Secondary Education will be promoted.

Greitens' latest appointment, Jennifer Edwards, Springfield, president and co-founder of the Springfield Center for Dyslexia and Learning, criticized public education in her first quote of the governor's news release:

I applied to be on the Board of Education because I am worried about the downward trend in student readiness for college, and the fact that many kids with special needs are not being properly addressed in public schools.

She quickly added, "Having said that, there are many examples of innovation and success throughout our state. I can point to the district my children attend, Springfield Public Schools. Along with many other surrounding districts, they have created innovative programs, such as Go Caps, which I believe will drive higher student success. I look forward to the opportunity to serve in order to improve educational opportunities for students across Missouri.”

Edwards replaced Tim Sumners, Joplin, who was appointed in late October and was preparing to attend his first meeting today when he was told by voicemail and e-mail that his services would not be required.

That makes it likely that Vandeven will be fired by five State Board members who have not even been approved by the Senate.

Sumners, like another Greitens appointment who was quickly shoved out the door, Missy Gelner of Springfield, was reluctant to fire Vandeven, a sentiment that has been shared by many in the legislature and among Missouri school districts.

We fear that this strategy will culminate in the appointment of an out-of-state charter school advocate with no understanding of our state or region, who intends to bring a national school reform agenda to Missouri that is a proven failure across our country. We implore Governor Greitens to reconsider. Continuation on this path will harm the educational experience and destroy collaborative progress.

The letter said the attempt to fire Vandeven was not about education, but politics. "Unless Missouri changes course, our students will be the ones who suffer from this political fallout."

The letter was not signed by Joplin R-8 Superintendent Melinda Moss.

Greitens' move to reshape and privatize Missouri education comes as no surprise.

A post on the October 8, 2016 Turner Report revealed the amount of money charter school advocates plowed into the Greitens campaign:

While much publicity has been given to the amount of money Republican gubernatorial candidate Eric Greitens has received from proponents of right to work laws, the former Navy SEAL has also been receiving sizable contributions from anti-public school sources, including longtime voucher and charter school proponents.

A search of Missouri Ethics Commission documents shows that Greitens has received at least $695,000 with a record of attacking public schools and teachers while pushing for charter schools and privatization.

Among those contributing to Greitens:

$275,000 from Bernard Marcus, founder of Home Depot. Marcus gave $250,000 to the misnamed Families for Better Public Schools, a pro-charter committee in Georgia. (The only thing public about charter schools is that they drain taxpayer money from public schools. The public has no say in how the schools are operated, they do not have publicly elected boards, and board meetings are seldom, if ever, open to the public.)

$50,000 from Ron Weiser, one of the top contributors to the Great Lakes Education Project, an advocacy group for expanding so-called school choice and charter schools.

$125,000 from Julian Robertson, founder of Tiger Management, who gave $25 million to the Success Academy charter schools.

$100,000 (five $20,000 contributions) from the DeVos family of Michigan, which originally found the pro-voucher group All Children Matter and Amway. Dick DeVos began the effort to undermine public schools by calling them "government schools."

The amount of money Greitens has received from public education foes may be far greater than the contributions listed above.

At this point, Missourians also have no way of knowing who contributed to the $1,975,000 Greitens received from a group calling itself Seals for Truth, though that group is not 527c and will have to list its donors on its quarterly financial report which is due to the FEC by October 15. The contribution was the largest in Missouri history, until Greitens received $2.5 million from Republican Governors Association-Missouri, the largest of five contributions from the committee.

Greitens' website lists a one-paragraph statement on his beliefs on education.

"Too many Missouri children and parents are trapped in failing schools. I’ll lead efforts to provide more choices and opportunities for kids who need it most."