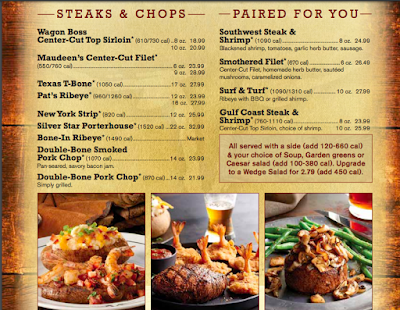 No trips to Las Vegas this time, but Seventh District Congressman Billy Long's campaign contributors paid for 15 meals worth $2,627.19 during the first 17 days of October, according to the pre-general election report filed with the Federal Election Commission.

Most of the money came from three meals recorded on the final two days covered by the report.

The FEC document shows Long's campaign contributors footed the bill for a $1,118,36 meal at the Saltgrass Steak House in Branson.

It is hard to blame Long for selecting the Branson restaurant. After all, its website says Saltgrass Steak House is known for its "great food" and "legendary hospitality."

Saltgrass Steak House's prices indicate that the $1,100 plus total would enable Long to order more than 40 smothered filets, which appear to be the most expensive item on the menu.

Or you could order 50 grilled salmon.

And imagine those doggy bags.

A real deal would be the approximately 80 brisket burgers you could buy for the $1,100.

The Saltgrass Steak House meal took place on Tuesday, October 16. If it took place between 3 p.m. and 7 p.m., information that is not included in the FEC report, Long's campaign contributors may have saved money by paying $2 less for draft beer during the restaurant's happy hour.

Or just $3.75 for the house frozen and rocks margaritas (the perfect drink if you's wasting away again in Branson).

The FEC report indicates most of the money spent by the Long campaign on meals was spent during a two-day period, the $1,118 spent at Saltfood Steak House on the 16th. On the following day, the Long campaign spent even more money $1,134.72 at the Capitol Hill Club, though the expense was for two separate meals, one for $924.15 and the other for $220.51.

And maybe he could ask some of his supporters to join him.

Not sure I would join him, reaching for a roll might get a fork or teeth marks in your hand. This guy and his party have no shame about flaunting their excess in front of voters. I guess it speaks highly or not of their constituents that do not seem bothered by their antics. It is laughable in some perverse way that they are getting away with it and getting re-elected. So much for Missouri values as espoused by Hawley. It is amazing that Hawley talks about the division of people in the country which is mostly to blame by Heir Trump.

I would LOVE to hear from the person who waited on them!Did he tip the little people? Try to grab someone's you-know-what? (On a sidenote,the double boned pork chops sound pretty good.)

chow down Billy ...as long as it is on the PAC tab

These posts always remind me of petty, jealous children. So what if he goes to nice restaurants. Is it extravagant, you bet.
I wouldn't mind eating a great meal myself, however I can't afford to eat like he can.
But I don't begrudge anyone who can.
It's all about enjoying life.

Maybe some of you need to splurge on something extravagant once in awhile.

This is confusing. Congressman Duncan Hunter of California is in big trouble for using campaign funds for personal expenses, so how does Long get away with these restaurant tabs, here and in Vegas? He must be reporting these meals as campaign expenses, which raises a couple of questions. Whom is he entertaining, and for what purpose?