Trial date set for Joplin man accused of beating, choking and threatening man because he was in National Guard 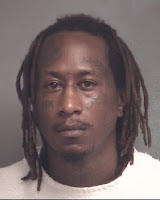 A January 22 trial date has been scheduled for a Joplin man who allegedly beat, choked and threatened a man because he had served in the National Guard.

Moses Ramsey, 27, along with Sergio Zuniga, 24, Webb City, are charged with kidnapping, robbery, assault and armed criminal action in connection with a June 27 incident at 2025 S. Murphy Avenue.

Ramsey's trial, which will be presided over by Judge Dean Dankelson, is expected to last three days. No trial date has been scheduled for Zuniga.
The probable cause statement is printed below:

Whne A. W. refused to give them money, Zuniga and Ramsey beat A. W. by hitting him and kicking him until he became unconscious. They then tied his hands and feet and gagged him.

Once A. W. was tied up, Zuniga and Ramsey continued to punch and kick A. W. They then dragged A. W. into the bathroom where they threw him into the bathtub, wrapped the shower certain around his neck cutting off his airflow and threatened to kill him.

During this ongoing assault, Zuniga and Ramsey robbed A. W. of his wallet, pants and cell phone.

As the assault occurred over multiple hours, Zuniga and Ramsey kept A. W. at the residence against his will. A. W. was transported to the hospital for injuries from the assault where it was confirmed A. W. suffered from a concussion and a fractured left cheekbone.

A. W. stated that he was in fear Zuniga and Ramsey were going to kill him and assaulted him because he had been in the National Guard, which Zuniga and Ramsey told A. W. was the same as being a police officer.
Posted by Randy at 11:37 AM

Both of these criminals should be imprisoned for life. They would have killed this man, given more time. Ramsay is a very violent, dangerous, repeat offender and should be locked up for good.

Wasn't Moses Ramsey arrested for being involved in the murder that happened Christmas Eve of 2017? And then he committed another violent crime in June of 2018? Disturbing.

Don't know Moses but I know Sergio. Sounds exactly like him.