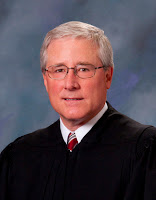 Cordonnier, who has been a judge for 10 years, is the seventh to be put in charge of the case since Vaden was bound over for trial after waiving his preliminary hearing. Cordonnier became the presiding judge in Greene County earlier this year.

Vaden, 23, Carl Junction, is charged with second degree murder and felony child abuse in connection with the December 1, 2017 death of three-year-old Jayda Kyle. Vaden was the live-in boyfriend of the child's mother.

Cordonnier's appointment was made necessary after all trial court judges who were eligible to hear the case were eliminated from consideration.

Vaden's attorney, Tracey Martin, used her automatic removal to have Judge Dean Dankelston removed after Dankelson overruled Martin's motion that he take himself off the case because of his friendship with Jayda Kyle's grandfather, attorney Judd McPherson.

No date has been scheduled for Vaden's trial.