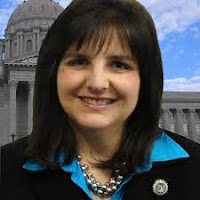 (The author of this post, former Rep. Cynthia Davis, R-O-Fallon, is an internet talk show host.)

How many of you can't wait until the election gets over so we can get back to normal? How many of you are sick of getting your mailboxes stuffed and all the ads on TV? Millions of dollars are being spent because advertising changes the minds of voters. But how much of it is honest?

Candidates can say anything they want during campaign time. It is not binding after the election. If a candidate promises something and then changes, the election cannot be undone. That's why Claire McCaskill is trying so hard to make sure the voters are not aware of how far to the left she leans. Here is the video of her showing how hard she works to camouflage her real motives. Will she be smoked out this time around, or will the voters trust whichever side has the most ads?

A friend of mine sent me an email from Claire McCaskill where she said, "We're in a hell of a fight...". Can you imagine how far down we've come? An elected Senator believes she will receive more money for her campaign by using a swear word in her appeal? We know that's how she talks because she made a video asking men to "shut the hell up."

Before you vote you owe it to yourself to understand the philosophy behind the candidates. Our current Senator claims to be a "moderate", meaning she wants the greatest number of voters in the middle of the spectrum to support her. Not a bad campaign strategy. However, when Claire McCaskill endorsed the 2008 president of the United States, she preferred Barack Obama to Hillary Clinton. Apparently, the "support the woman" thing didn't work there. Hillary Clinton was more moderate than Barack Obama.

We only get this opportunity once every six years. If a voter doesn't know the candidate, call the campaign office and get your own information first hand. Cherish your vote! Don't squander it on anyone or anything you haven't studied.
Posted by Randy at 8:13 AM

Who are you to condemn someone of her stature when your president gropes women, uses his executive privilege to gain money for him and his family and cozies up to Putin. What a two faced person like yourself and your party telling our ICE to separate mothers from their children and not reuniting them? What about Hawley's lies he has been spitting out on campaign ads and the clowns that have been appointed to Dept. heads who fleeced the American people for their own gain. It is sad what you support the likes of them and probably go to church and pray for your party to defund health care for mothers, children and the elderly.

Cynthia Davis: Trump the most Christian, honest president we've had since Reagan

A good political dialogue is healthy, but we must abhor name-calling and hatefulness.

Donald Trump has turned into a pleasant surprise. At the beginning of his campaign, he started out being an irreverent, worldly, inexperienced, crass, sharp-mouthed candidate. By the time he won the election, many people were just happy he saved us from Hillary Clinton. So far, he has turned out to be the most Pro-American, Christian, pro-free-market and honest president we've had in this Country since Ronald Reagan.

On top of that, when is the last time you heard the first lady lead thousands of people in praying "The Lord's Prayer"? Clearly, whether you like his personality or not, we can't deny he has done more for our Country than most others who have occupied the White House. With this act, she has earned more honor than most first ladies we have seen.

Surprisingly, most of his actions are simply keeping promises made during the campaign. Now that the election is over, it's time to move on to governing. We need to give him a chance to straighten out the mess he inherited.

So far, he's protecting our safety, straightening out the bathroom confusion and doing his best to get rid of unnecessary regulations. There's a lot to feel good about here. He's been more effective than most Republican office holders.

This is so funny I laughed out loud! You support a president with no sense of shame or decorum, who has admitted sexually assaulting women, lies as easily as he breathes and you have the nerve to be upset about the word hell used as a curse word? The fact that you don't realize the irony here is the best part.

Two wrongs don't make a right. I am embarrassed by the behavior of most people, but especially the democratic party and their uncivilized behavior. They have completely lost control.
They will only continue to go downhill from this point.

When Trump is gone the White House is going to have to be burned. There are not enough chemical to fumigate it. Of course as fast as he is destroying the economy, the next President is probably going to have to live in a double wide.

4;22
Did you mean Republican Party?

Promises one thing and does another. Might be equated with Supreme Court appointments or the Federal Courts. Very much like present campaigning by republicans saying they are all for pre-existing conditions to be kept while they just recently decided to not require health insurance companies to cover it. Maybe congress needs to seek a health care plan on open market to get a taste of their own idea of health care available and its cost. Best to lower salaries and then let them seek health care they would be satisfied with for their family. Take note Hawley as it will apply to you.

I thought it was a Thai restaurant, but the owners were deplorables and the sign really said Nutjob said...

Repubes are selling all the freedum their deplorable voters think they want.

Also they will be quoting buybull verses to 'splian it all while the Pharisees like Franklin Graham and Creflo Dollar fly around in their $50 million dollar jets bought with the money they conned out of these same deplorable Repube voters.

Absolutely ridiculous. You need to do some fact checking. And the word "hell" is mild compared to the things the current administration says and does.

People on the left are so scared and lost right now. I thought it was bad the way the right acted when Obama was in office, but this is ridiculous. Read the over the top hate in some of these posts. Hate usually comes from fear. The only thing coming out of the lefts mouth these days is scared rhetoric that makes the days of "he wasn't born in this country" seem sane.