Election hasn't been held yet, but Ben Baker already received $1,000 gift from lobbyist 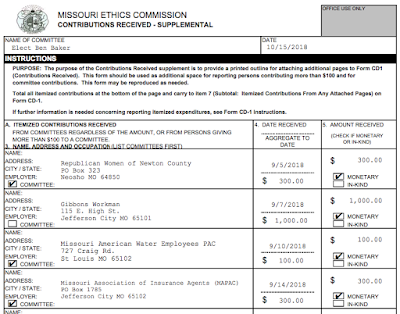 If Ben Baker is elected to the Missouri House of Representatives November 6, he will not take office until January, but he already is taking gifts from lobbyists.

Gibbons Workman is one of those revolving door creations in which term-limited Michael Gibbons, after rising to the top of the Missouri Senate as president pro tem, immediately went into business for himself, lobbying his former colleagues. 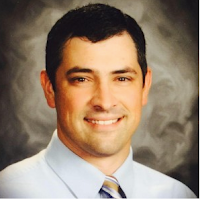 His client list is a who's who of special interests, including the following:


Gibbons Workman was not the only special interest contributing to the Baker campaign, according to his report:

Out of the $3,195.75 Baker received during the past three months, the only local contributor listed was a $300 donation from the Republican Women of Newton County. 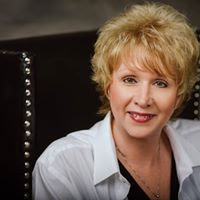 Baker's Democratic opponent, Neosho businesswoman Angela Thomas, raised $3,056.65 between July 1 and September 30, according to her October quarterly report, with all of it coming from Neosho, Granby and Joplin contributors, topped by $1,000 from former Crowder College President Kent Farnsworth, who is also Thomas' campaign treasurer.

If Kent Farnsworth is backing her I would have to go with her. Baker is a total mess which fits in with the rest of the republicans that I have seen. Isn't it about time for a change Missouri, really, going with the same worthless butt kissing people that cater to money interests and such. Look at your latest candidates, Hawley, Blunt and Long. It only makes one laugh at how they operate let alone looking at their leader off the wall Trump.

Don't worry about Trumpty-Dumpty. He will cut and run as soon as his financial information is released.

It just seem quite obvious to me that Ben Baker has ulterior motives and can’t be trusted. He has been very evasive when questioned, and that’s when he actually makes himself available to answer questions. His agenda truly is not the agenda that our district needs. His record as mayor has been very dismal. I hope people see him for who and what he really is....not good for us.