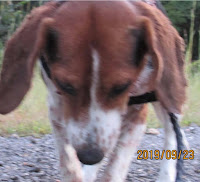 (From the Humane Society of the United States)

The Humane Society of the United States is offering a reward of up to $5,000 for information leading to the identification, arrest and conviction of the person or persons responsible for the recent cruel and thoughtless torture of a dog in Neosho, Missouri.

This reward is in addition to cash rewards currently being offered in this case.

The Neosho Police Department responded to a complaint on September 23 in reference to animal abuse.

Arriving at the scene, they discovered a female beagle who had approximately 75 percent of her skin removed while she was alive. The dog either escaped from the assault or was set free in this condition.

Officers caught the injured animal and after consulting veterinary staff, the dog had to be euthanized to end her suffering.

Violence against animals is a crime that affects entire communities. The connection between animal cruelty and human violence is well documented by scientists, criminologists and the law enforcement and medical fields.

Studies establish a clear link between animal cruelty and many other crimes, from narcotics and firearms violations to battery and sexual assault.

Securing the serious attention and engagement of law enforcement officials, prosecutors and residents in cases involving allegations of cruelty to animals is an essential step in protecting the whole community.

“It takes a truly callous person to skin a dog alive and it’s completely heartbreaking to imagine the suffering this dog endured,” said Amanda Good, Missouri state director for the Humane Society of the United States.

“We hope that this reward will encourage anyone with information about this terrible crime to come forward, not only to help seek justice for this animal, but also to ensure the safety of the entire community.”

The Humane Society of the United States’ Animal Cruelty Campaign raises public awareness and educates communities about the connection between animal cruelty and human violence while providing a variety of resources and support to law enforcement agencies, social work professionals, educators, legislators and families.

The Humane Society of the United States has doubled its standard cruelty reward from $2,500 to $5,000 thanks to a generous donation from a board member. For information on statistics, trends, laws and animal cruelty categories, click here
Posted by Randy at 10:24 AM