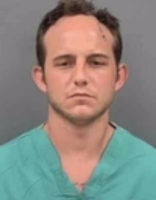 A Joplin man faces second degree murder charges in connection with a fatal accident Tuesday, in which either he or the deceased drove a stolen tractor off a bridge.

The Lawrence County Prosecuting Attorney filed the second degree murder charge against Kendall Lee Crosswhite, 28, because the death allegedly occurred during the commission of a crime.

Crosswhite is also charged with receiving stolen property, a felony.

According to the Highway Patrol traffic report, a 2011 John Deere tractor, driver unknown, ran off the left side of the roadway and traveled off a bridge 2:30 a.m. Tuesday, Lawrence County Coroner Scott Lakin pronounced Justin T. Workman, 35, Joplin, dead at the scene at 4 a.m.


Crosswhite was flown to Mercy Hospital, Springfield, to be treated for serious injuries.

The circumstances leading to the charges against Crosswhite are detailed in the probable cause report, which is printed below:

Reportedly, a farm tractor was overturned, off of a bridge, and the occupant was trapped inside.

Upon his arrival, at approximately 0339 hours, he located a 2011 John Deere 7230, front wheel assist tractor, equipped with a John Deere loader, overturned off the south side of a narrow bridge west of MO 97 in Lawrence County, Missouri.

Trapped underneath were two white males. One of the males was subsequently identified as Justin T. Workman, date of birth, June 18, 1984 who was pronounced dead at the scene by Lawrence County coroner, Scott Lakin on October 22, 2019, at 0400 hours.

The other male was eventually identified as Kendall L. Crosswhite, date of birth February 24, 1991.

Crosswhite sustained serious injuries and was transported from the scene by Mercy Ambulance to Mercy Hospital in Springfield, Missouri where he is currently receiving treatment for serious injuries.

An employee of Biellier Wrecker Service, Mt. Vernon, Missouri, stated he witnessed a tractor, nearly identical, being unloaded on the Interstate 44, eastbound, on-ramp at approximately 0130 hours. The vehicle towing the tractor was described as a white Ford F350 with a black gooseneck trailer.

At approximately 0955 hours on October 22, 2019, the tractor was confirmed as stolen from Galena, Kansas. The owner of the tractor said the tractor was stolen within the last two days and is making a stolen vehicle report with Cherokee County, Kansas Sheriff's Office.

Recovered from the crash scene was a black cellular telephone. This device was located near the tractor and where it came to rest. A Stotts City volunteer firefighter picked the device up prior to giving the device to Trooper Rutledge, the firefighter unlocked it, and the fire fighter saw a text message that said, "Goddammit Kendall are you OK?"

A search warrant authorizing the search of this device was obtained from the Lawrence County, Missouri Circuit Court. A subsequent search of that device revealed the device was in fact Kendall Crosswhite's based upon several SMS messages that were sent and received on the device.

This message was sent in a conversation where Crosswhite was telling the recipient he had a flat tire but no spare to fix it with. The recipient subsequently responded with, "Isn't someone following you or isn't Justin with you ? Change it??? Justin in this message is most likely the deceased, Justin Workman.

Crosswhite later identified his "homeboy" as Justin Workman. Crosswhite then said he did not want to answer any more questions.

I am requesting that an arrest warrant be issued because (complete at least one of
the following):

I have reasonable grounds to believe the defendant will not appear upon a summons based on the facts stated above and the following information:

Crosswhite will most likely not appear for court based on his criminal history, which includes at least one conviction for resisting arrest.

If he is charged with a serious felony he will not appear.

I have reasonable grounds to believe the defendant poses a danger to a crime victim, the community, or any other person based on the facts stated above and the following information.
Posted by Randy at 3:54 PM