Vicky Hartzler: Missourians deserve to have an open impeachment process 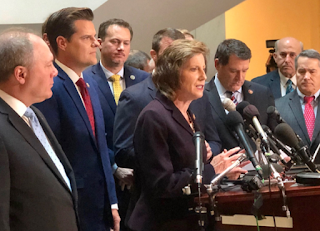 A few weeks ago, Speaker Nancy Pelosi announced an impeachment inquiry against the president without a vote of the House nor following an established set of processes that were used in the past.

Now they are denying most Members of Congress the ability to know what is going on or to participate.

As elected Members of Congress we all should have access to the full transcripts and information surrounding their investigations into the President, including attending the closed hearings and interviews.


Currently, democrats are hiding behind closed-doors interviewing individuals of their choice and denying Republicans the opportunity to call witnesses or speak about what they have heard. This dark process allows Democratic committee staff to selectively leak incomplete information to the press in order to help Intelligence Committee Chairman Adam Schiff build a narrative against a President his party has vowed to undermine since the day they took the majority.

The impeachment process is one of the most serious powers given by the Constitution to Congress. As such, the investigation being used to attempt to build yet another case against our President needs to be done in a transparent way where all constituencies are represented. The 746,000 Missourians I represent deserve to have that open process.

This is not about any one party or any one committee. I firmly believe that all members, from freshman Democrats to the highest-ranking Republicans need to have access to all the relevant information. As your representative I will keep advocating to be your eyes, ears, and voice on this very serious matter.
Posted by Randy at 7:20 PM


She has it half right. It's all the witnesses who really need to know what the other witnesses have testified to before they are able to best give their own sworn testimony.

This helps prevent contradictory testimony and needing to correct their testimony after they have testified.

The order of operations as it's always been is 1. depositions in private, 2. hearings in public, 3. Senate trial in public if articles of impeachment are issued by the House. Steps 1 and 2 took place with Nixon, who resigned when he knew he didn't have the votes in the Senate to keep him from being removed. Steps 1, 2, and 3 took place in Clinton's case, but he wasn't removed from office. The House impeachment inquiry that's proceeding now will move on to public hearings with witnesses, as planned, after the depositions are concluded. If there's a case to be made against the president, it will be made in public at the hearings and perhaps at a trial in the Senate, where witnesses will testify and can be questioned by Democrats and Republicans. Read the Constitution. It's very clear about impeachment. Republicans are going to get what they say they want--and they always were--despite the smoke screen they're trying to create, and I don't think it will be pleasant for them when it happens.

Ridiculous! If they just speak true facts and not lie, there will be no problem.
Are you really suggesting they corroborate their stories in advance?

Somehow Vicki has forgotten that some of the members of the panel to query witnesses are republicans. All the tricks played by republicans on Obama are forgotten or ignored and show a complete lack of intelligent bi-partisanship on their part. They are a very dark spot on our political system who are there for only the corporate interest and their own monetary interest. Missouri needs to wake up that their representative(Senate or otherwise) is not there to help them.

@9:36 PM: Depositions are not that private, and have representatives of the other side attending.

The grand jury analogy that's been used also fails, they don't have 2 classes of jurors, only one of which hears the witnesses.

9:57 I can't decide if your comment is serious or sarcastic. Sarcastic, I think. How grand jury proceedings are conducted certainly answers the question about the possibility of witnesses trying to get their stories straight and in alignment before testifying.

Once again the republicans are trying to cover up their fear that their beloved president is guilty and they do not want to accept the outcome. I would imagine in a distasteful way they will try and disrupt the proceedings to give the American people a full view of how corrupt their party has become. Each and everyone of them should be running, not walking, to disavow their allegiance to imbecile like their leader to try and reinstate the citizens belief in their party that it is "For the People, by the People" and now what they can put into their pocket.

What else do republicans have but standing atop Bullsh*t Mountain and screaming things like "No collusion!" and "The process stinks!"?

You might think they have some buyer's regret once they realized their Derp Leader belongs on a short bus to a mental institution (or a prison bus headed to a prison) instead of Air Force One but their own deep derp prevents much self realization or the ability to do very much reasoning.

Lefties.
You guys are funny. And think you live in a Banana Republic. No need for transparency. No need to allow the people to know the workings of their government.

The whole think is ridiculous. Impeachment was first uttered the day after the election. It didn't matter what for. Impeach first and find the reason second.

You guys are think you are funny. When in fact you live in a Mango Moron Republic. No need for transparency. No need to allow the people to know the workings of their government. (There's always a Jared to come up with a Middle East Peace Plan. A Peace Plan so secret that no one has heard of it. It's a good thing Young Jared is almost as schmart as his father in law. Or his convicted felon father for that matter. Another silver spooner nepotism hire for sure!)

Impeachment was first uttered the day after the election. It didn't matter what for. Impeach first and find the reason second.

Just like the right wingnuts in congress planned to do to Hillary?

Senior Republican lawmakers are openly discussing the prospect of impeaching Hillary Clinton should she win the presidency, a stark indication that partisan warfare over her tenure as secretary of state will not end on Election Day.

And a third senior Republican, the chairman of a House Judiciary subcommittee, told The Washington Post he is personally convinced Clinton should be impeached for influence peddling involving her family foundation. He favors further congressional investigation into that matter.

“It is my honest opinion that the Clinton Foundation represents potentially one of the greatest examples of political corruption in American history,” said Rep. Trent Franks (R-Ariz.), who leads the Constitution and Civil Justice subcommittee. “Now that perspective may be disproven, time will tell. But given that conviction on my part, I think all options are definitely on the table.”"

Can I get a redneck RWNJ hell yeah?

5:24...is that really all you have? No original thoughts of yer own there dude?

5:24 never has a coherent original thought. You can pick out his/her/their posts by the childish name calling and obvious self loathing for people who live in this area.

Even if Republicans had planned on trying to impeach the unelectable Clinton, does that make the Democrats hysteria ok?

Not sure why I bothered asking because if 5:24 does respond it will be mostly irrelevant copy and paste mixed with a comment about a papaya, mango or coconut.

I would guess a majority of the die hard Trump supporters know little, if anything, about how the process works. Furthermore, they don’t want to know. It seems they have become so invested in supporting Trump they absolutely refuse to examine any of the information objectively.

I hope the country can listen to the hearings with an open mind and then decide. It would be so much better for our country if people would make up their own minds based on evidence rather than what TV pundits tell us to think.

7:43, I would guess you are wrong. Furthermore I would say that you should follow through with what you hope for. Listen to what the President's supporters are saying with an open mind. The people I hear talk are concerned with a government that had plans to impeach before he was sworn into office. The ins and outs of the procedure and the lawfulness or unlawfulness is secondary to idea that one political side may be simply throwing a fit because they lost an election. No one can even verbalize what the grounds for impeachment are. Quid pro quo? What evidence? Is it similar to the evidence of Russian collusion? If there are legitimate reasons this time, why not put some cards on the table to gather public support and put concerns to rest? That would make more sense than visiting late night comdey talk shows that masquerade as news outlets and pretending that you are upset by what is transpiring.
No matter how this plays out, our country has been damaged. Either by having a president who is legitimately impeached or by a political party that has attempted to overturn a legitimate election. Honestly, it doesn't even matter because the damage is done. The country's two party system is broken.

As predicted, the brainiac at 5:24 has nothing else to say.