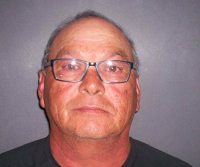 Daniel Chavez, 64, pleaded not guilty this morning during a video arraignment in Jasper County Circuit Court. A bond modification hearing has been scheduled for 8:30 a.m. October 16.

Chavez' alleged crimes took place between 2006 and 2015, according to the probable cause statement and involve three children.

On August 5, 2019 (alleged victim) was interviewed at the Children's Center in Joplin. (She) described an incident when she had walked in on Chavez while he was using the bathroom. Chavez told her to come to him and show him her hand. (She described him taking her hand on putting it on his body.) She stated she thought she was approximately five or six years old when this incident had occurred.

On August 5, 2019, a second victim was interviewed at the Children's Center. She remembered that she was present when Daniel Chavez was watching pornography. (Note: The girl said she remembered the video showed an oral sex act.) She described another incident at the Webb City house where Chavez touched her genital area on the outside of her clothing when she was approximately four to six years old.

Incidents described by her:

She said Daniel Chavez took her hand and put it on his own genital area over his clothing. She described the incident as happening when she was in the third or fourth grade.

She stated Chavez showed her pornography on two occasions. She described the pornography as adult men and women having sex and stated that Chavez told her, "we're gonna do this stuff one day" and "don't tell anyone we watched this, it's our little secret." She stated she was in either the third or the fourth grade when these incidents occurred.

The probable cause statement alleges Chavez' actions toward the third alleged victim grew even worse as time passed as he made her fondle him and attempted to force her to provide oral sex to him. The girl said this incident happened when she was going into the fifth grade.
Posted by Randy at 1:41 PM

I wonder if the police get tired of doing all the work, trying to bring criminals to justice, knowing in the end elected prosecutor and elected judge will water it down?

That's sick I've known Mr. Chavez for years & heard rumors from a small community in Ulysses Kansas were I grew up that he was a molester he had a pass & now I can believe the rumors were true, like they say like father like son. That just makes me sick too my stomach. But he will be punished for what he has done too the victim's. I don't feel one bit sorrow for him he will answer to God & the law.