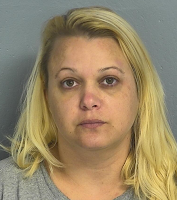 The trial of a former North Middle School reading teacher Amanda Schweitzer on child pornography and child sexual exploitation charges, originally scheduled to begin next month, has been reset for April 20.

The continuance came at the request of Schweitzer's attorney, according to documents filed in U. S. District Court for the Western District of Missouri. The government did not object to the request.

Schweitzer, 40, was accused of predatory behavior in a detention motion filed in January 2018 that included performing oral sex and having sexual intercourse with a 13-year-old boy, one of her students, texting him to tell him he was "hot" and "she wanted him," sending a nude photo of herself with a purple sex toy and asking him to send her a photo of his penis.

The 13-year-old, referred to as John Doe 1 in the court documents, was not the only one Schweitzer approached, according to the motion.

She sent nude photos of herself to two other boys, both 14 years old, the motion said. Schweizer sent one of the boys a message, apparently trying to flatter him by asking if he was 18 yet.

After that, the defendant tried to add him on Snapchat, but he blocked her. The defendant also messaged him to see if he wanted to go to a concert. John Doe 2 stated the defendant would nibble on his ear lobe during class, pretending she was whispering in his ear.


John Doe 1 showed the messages from the Schweitzer and her nude photographs to John Doe 3, according to the detention motion.

Schweitzer was initially arrested by the Joplin Police Department after the mothers of the boys discovered that Schweitzer was sending nude photographs to their sons' Instagram accounts.

During interviews at the Children's Center in Joplin, John Doe 1 revealed that his first sexual encounter with Schweitzer took place during spring break when she "drove him to the river in a white four-door car."

The second incident allegedly took place on March 29, 2017, at Schweitzer's home.
Posted by Randy at 7:13 PM

I cannot for the life of me understand why they are delaying the trial on something so vile as her actions for three years from her arrest. What about the mental state this puts the student(s) in that she has affected? Seems to me that a right to a speedy trial applies also to the "state" so it can move on to other matters of judicial importance. What kind of excuse could a lawyer give to persuade a court to allow it to be postponed for an additional 6 months after 2 1/2 years of first arrest?

I completely agree with you. What a disgusting excuse for a human, committing such and act and then prolonging the shame to her victim, their family and her own family. She is a deviant and selfish individual.