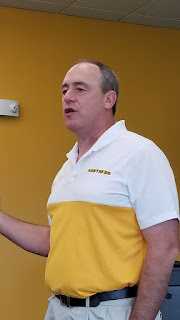 Missouri Southern State University President Alan Marble said the university is investigating complaints of MSSU students harassing fans on what has traditionally been the "visitors" side of Fred G. Hughes Stadium during the Lions football game Saturday night.

The students told the Central Missouri fans MSSU Coach Jeff Sims had asked them to sit on that side of the stadium and create noise and haze the visitors, according to a Facebook post by Rachel Cortez, a former Carthage High School teacher, that has gone viral locally.

Cortez, who was sitting on the visitors' side because she had a former student who was playing to Central Missouri, said some of the MSSU students were drinking from open containers, using profane language and leaving trash all over the place.

Sims responded, acknowledging he had asked the students to sit on that side and cheer for the Lions create noise, but not to harass Central Missouri fans or drink.

Sims spent a great deal of his message explaining that under MIAA rules there is no home side or visitors side and explaining to Cortez how other schools sit behind Missouri Southern's fans at away games.

When we play in other stadiums they put their bands, cheerleaders, and students behind our section to make lots of noise and make it difficult for the visiting team.

Sims said he asked the students to sit on that side to create a "better environment and stadium experience."

Sims apologized to any person "that felt a student or anyone was out of line, but that was an individual's action, not a reflection of the students or the university."

Cortez spelled out the behavior in her post and noted that a section behind the visitors' fans appears to have been reserved for the MSSU students.

We noticed a large portion of seats had been sectioned off in front of us (on the visitor side) and didn’t think anything of it.

In fact, when that section started filling up with Southern students, I thought it was kind of weird, seeing as the home side of the stadium is significantly larger, but thought it was cool nonetheless that students were coming out to cheer on their team.

After only a couple minutes of the Southern students being there though, they started yelling things like “I slept with your girlfriend/wife last night,” “f@ck you guys,” and other obscene words.

The section filled up fast, and most of the students had visible bottles or cans of beer. I honestly don’t care that they were drinking, but the trash they left behind was disgusting. I’ll post a picture.

It was so so so disturbing to watch. The university police did NOTHING but stand there and watch it happen. I am not bashing police by any means, but they stood there and watched the kids acting like this and when the visitors who paid $15 per ticket to watch their kids play football asked the police to please do something, they just stood there.

The part that makes me the most upset is this: we had multiple students tell us that they had been asked by Coach Sims -Southern’s head coach - to sit on the visitor side and “haze them.”

Cortez had positive words for some MSSU students who apologized for the rowdy behavior of some of their crowd and praised students who picked up trash that had been carelessly strewn about.

After word of Cortez' post spread, Sims responded with the following, which is posted exactly as it was written:

Rachel Cortez, Some of what you are saying is true, some I would like to straighten out.

1 At MSSU and at other MIAA stadiums it is not viewed as a home side and a vistors side. When we play in other stadiums they put their bands, cheerleaders, and students behind our section to make lots of noise and make it difficult for the visiting team. The other side of the stadium is for reserved seating. Our opponents have not filled that side of thhe stadium all season.

2 In a effort to create a better enivornment and stadium exiperence for MSSU football, I met with, asked, and encouraged our students to come in the stadium and bring school spirit to the game. Prior to my arrival they spent 90% of their time outside the stadium.

3- When I came out from halftime they were cheering loudly and being supportive, fro. The field you cannot hear specific cheers unless they do them as a group and I definately encouraged them to continue to cheer as any and all college students do at a game

4- No one encouages or believes its right for them to have open containers, or say some of the things you posted but you also posted that some of the students were very kind.

I hope we wont let the actions of a few hurt the opportunity for many to have a great college exiperence.

I personally apologize to you, your family, and any CMSU fan that felt a student or anyone was out of line but that was an individuals action not a reflection of the students or university.

I hope the next time you visit there are more students in the stands having even more fun but also in a way that is a little more appropriate.

Missouri Southern State University was made aware over the weekend of inappropriate behavior by some if its students seated on the East side of Fred G. Hughes Stadium during Saturday’s Homecoming game. The University finds the behavior described by our guests as inappropriate and unacceptable and we offer our sincere apology to the fans, coaching staff and student athletes of the University of Central Missouri.

The incident is under review by the University and has already been discussed with student advisory groups and staff in intercollegiate athletics and student affairs. Missouri Southern firmly believes the actions of its employees, students and fans should represent the University’s values. It is the University’s intent to use Saturday’s incident as a learning experience for all involved and to move in a positive direction both for the reminder of the football season and beyond.

"It's unfortunate what happened, but God has a plan."

I went to the hypnotist show at Southern a few weeks ago. Felt like security should have been there since some in the audience were confronting the hypnotist & it began to escalate.

Some of the MSSU yutes were acting like future chumps for trump?

Congrats on shoe-horning in anti religion snark to this story that had nothing to do with that.
You are now just as boring and useless as all of the atheists that you admire from TV and the internet.
Achievement unlocked. Good for you!

Anti religion and politics both brought into a story that has no connection. The tolerant left at work. Name calling and attacking for no reason.

Inclusiveness and diversity for all. As long as you are just like them.

It is stupid to have students do that and it moves me to believe that MSSU is nothing more than a junior college or advanced high school with similar mentality. It does speak with authority that Joplin and surrounding area are still living in the dark ages and deserve the lesser than good reputation of being second/third and even fourth to towns like Columbia and Springfield. They are still hicks that walk barefoot out of the woods to go to pre-college.

Where is the "anti religion snark to this story that had nothing to do with that" that offends your sensitive sensibilities?

“When we play in other stadiums they put their bands, cheerleaders, and students behind our section to make lots of noise and make it difficult for the visiting team.”

I’ve never seen home bands behind visitors’ sections, let alone home cheerleaders behind anything. Doubtful that Sims realized through his word salad of excuses that this post would go viral, although he is certainly no stranger to unflattering press.

Uh yeah, God and Trump are to blame for the bad behavior of coaches and students.
Moronic thoughts from the deranged left, the only type of though process they have.

It's not in the story, it's in the top comment. It doesn't offend my sensibilities, just everyones intelligence.
The lefts new thing is thinking that their snarky comments about anything conservatives believe in, (God, Country, Le Drumpfff, et AL.) actually offend us and hurt our feelings. You see, I used to be a liberal Democrat until about 1992. Imagine all of the snark and ridicule conservatives have endured since then. I'm far beyond having my "sensitive sensibilities" offended. The attempts are sort of funny and a little bit sad, but as long as they keep coming, 2020 is in the bag.

I was a student at MSSC before it was MSSU and there wasn't a finer college anywhere. Schools are only as good as their role models and the last thing I want to see is that any administration tolerates this type of behavior from students and especially an instructor/coach. Joplin is not yet big enough to be "thug" central.

What is a "thug" central?

"It's not in the story, it's in the top comment. It doesn't offend my sensibilities, just everyones intelligence. "

Sad that politics had to enter this as well as ridiculous "Southern" bashing. If true this is an unfortunate situation that should be corrected. It does not reflect the views of the community or university. Students make mistakes and need to be encouraged to do better and not influenced to be like "other schools." Hopefully this is a learning experience for all involved. Apologize, don't do it again, and move on.

The President at Southern has a good working knowledge of drinking at inappropriate times, getting caught doing said, and being politely excused due to his political affiliation and affable personae.

go back to Carthage hoser