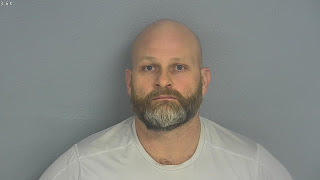 A Joplin man withdrew his not guilty plea and pleaded guilty today in U. S. District Court in Springfield to charges of marijuana manufacturing and possession of a weapon in connection with the drug operation.

Judge David P. Rush ordered a pre-sentence investigation for Jayme J. Richardson, 43, whose crimes were detailed in the plea agreement:

Sergeant Musche immediately noted a strong odor of green marijuana outside of the residence. Officers found RICHARDSON, a juvenile male, and an adult female identified as T.A. within the residence.

RICHARDSON and T.A. were detained as they were walking out of the master bedroom and secured pending a search of the residence.

MSHP Corporal Zack Bryan then conducted a warned interview of RICHARDSON, during which he revealed the presence of firearms in a safe and provided the combination to open the safe.

When questioned about growing marijuana, RICHARDSON requested an attorney and the interview was terminated.

Later during execution of the warrant, however, Corporal Bryan made a comment that the marijuana officers ultimately located had a strong odor. RICHARDSON smiled and volunteered that he had “only been growing for eight months.”

MSHP Sergeant Danielle Heil conducted an interview of T.A. at the residence. T.A. stated she began dating RICHARDSON in July 2018 and moved in with him at his residence in September 2018. T.A. went on to state that RICHARDSON was already growing marijuana when she moved in with him.

According to T.A., RICHARDSON would process marijuana approximately every two weeks and would water it once per week. A search of the residence revealed a room on the second floor of the attached garage (included on the search warrant) divided in half by plastic sheeting.

Officers also recovered the following firearms during their search:

• A Izhmash brand, Saiga 12 model, 12 gauge, semi-automatic shotgun bearing serial number H09409527 with a drum magazine in a gun safe in the southeast bedroom closet.
Posted by Randy at 7:03 PM