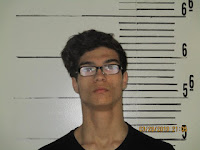 A Jasper man was bound over for trial after waiving his preliminary hearing Tuesday in Barton County Circuit Court.

The Barton County Sheriff's Office arrested Trevor Marsolick, 18, in March following an investigation that an adult man had sex with a 13-year-old girl four times.

After interviewing the alleged victim at the Children's Center in Nevada, charges were filed against Marsolick.

Marsolick's next hearing is 9 a.m. Thursday in Barton County Circuit Court.
Posted by Randy at 11:31 AM