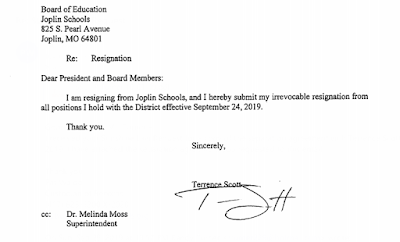 During a September 24 closed session, the Joplin R-8 Board of Education approved a $33,154.94 payout to Joplin High School business teacher/coach Terrence Scott, who was removed from the classroom shortly after the beginning of the 2019-2020 school year.

The amount is what Scott would have made if he taught in the district the remainder of the year.

In the agreement, which was obtained by the Turner Report through a Sunshine Law request, Scott to do the following:

-Not file for unemployment benefits


-Not take any legal action against the district

The district is also providing Scott with a neutral letter of reference, saying he worked for Joplin R-8 from August 10, 2016 to September 24, 2019. 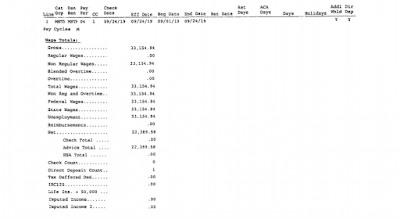 The "separation agreement" was approved by a 5-0 vote during the closed session with board member Brent Jordan abstaining. Those voting in favor were Sharrock Dermott, Lori Musser, Michael Joseph, Debbie Fort and Derek Gander. Deborah Gould was not in the meeting.

Scott was beginning his third year at JHS after teaching one year at North Middle School.

In addition to his teaching duties, he was an assistant coach with the freshman football team and head coach of the seventh grade boys basketball team.
Posted by Randy at 7:31 PM

With all this being public information, I think the parents deserve the right to know what is going on , especially with those of us that he taught our kids.

Ask your child. I'm sure they have heard by now the reason!

I imagine the district had to sign a non-disclosure in order for him to accept his "resignation" local politics at it's best. Just like the deal with our last city manager. The tax payers pay to remove the undesireables from their positions. I remember when people were just fired and went on down the road. What happened to those days?

The school district is not allowed to disclose the reason behind his leaving. It's part of the privacy laws binding Human Resources anywhere.

Please move along.
Nothing to see here.

Please move along.
Nothing to see here.

I think I am going to draw conclusions and fret over this situation.

I heard he had written a book and was trying to get his students to either read it or buy it... I am really not sure how it happened.

He is an upstanding person who genuinely loves people. I don't know what happened, but I'm willing to give him the benefit of two or three doubts. I'd say he may have made someone mad. Not authored any books to my knowledge.

12:10, I believe the comment regarding a book was supposed to be funny.