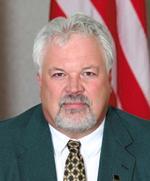 The Joplin City Council passed by a 7-1 margin a few minutes ago a resolution to censure Mayor Jon Tupper for ethics violations concerning his son's purchase of a house near Joe Becker Stadium.
The resolution was offered by Councilman Bob Harrington. Harrington, Jim West, Phil Stinnett, Mike Woolston, Gary Shaw, Melodee Colbert-Kean, and Richard Russell supported the measure, while Councilman Morris Glaze cast the sole dissenting voice. Tupper abstained.
Before the vote was taken, Tupper said his main concern was to get this behind him.
"I'm tired, I'm real tired. I'll do better. I promise you I'll do better. I'd like to see this end and this city move forward," Tupper told the City Council just before its vote. "My son bought a house, he lives in that house, he is proud that he is in Joplin
"I made a mistake. There are people in this building who knew my son was purchasing this house," Tupper said, adding that they may not have been the right people. "I never intended to embarrass myself, my family, this council and, for sure, the citizens of this community."
Posted by Randy at 5:28 PM

Why did appointed councilman Morris Glaze vote no on the censure? Is it because he is more loyal to those who gave him the office than to the people?

But he still has never said he was sorry, he just can't do that.