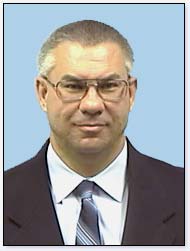 Joplin Police Chief and perennial job hunter Kevin Lindsey's interview for the police chief position in Fort Smith, Ark., will be held Friday, according to an article in the Times Record of Fort Smith.
His chances to land the post have improved. Lindsey was initially one of four finalists for the position, but one of the candidates has withdrawn, the article said.
If Lindsey ends up being one of the one or two men the search is narrowed to, Joplin residents will have a chance to let Fort Smith know how they feel about Lindsey, the article indicated:

Reed hopes to narrow the list to one or two candidates and then dispatch two to three officers from the Fort Smith Police Department to the towns where the finalists live so that more thorough background searches can be completed.
Daniel, Lindsey and Thomas were chosen from a list of 45 candidates who applied to be the city's next police chief. The 11-person committee helped choose the finalists.

Lindsey has been invited to stay in Fort Smith for a couple of days, according to the article.
Posted by Randy at 5:52 PM