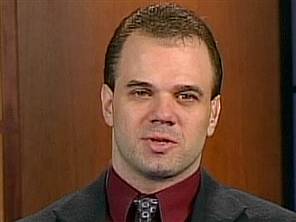 It's not the kind of story you see printed in the newspapers.

A distraught underaged girl, pushed to the ground and kicked three times in the stomach by her adult boyfriend. Police officers like the JPD's Chad Comer have heard it all before that never makes it any easier.
"The victim said that she is possibly pregnant with his child," Comer wrote in his report on the Oct. 8 incident. Later that day, Comer arrested the boyfriend for felony child abuse.
That was just one of the events in an average day for Comer or any other officer in Joplin or anywhere else in this country. Except for times of crisis like 9-11 or for Joplin, the Monday shooting at Memorial Middle School, we have a tendency to take what our police do for granted.
Unfortunately, while we overlook what the police department does for us, there are others who don't.
One of those people is James W. Schottel, a St. Louis lawyer.
Schottel, only two days after the Joplin Police Department was rightly heralded for its work in keeping the Memorial Middle School situation under control, filed a lawsuit against the department in U. S. District Court for the Western District of Missouri.
Schottel (pictured above) is representing Jeffery Murphy, who claims he suffers "physical and mental anguish and suffering, past, present and future medical expenses, emotional distress, humiliation, fear, loss of freedom, deprivation of constitutional rights, lost earning capacity, loss of enjoyment of life, loss of bodily functions, and other related expenses and damages" after being accidentally shot in the hand by Comer on March 27, 2005.
That must have been some bullet.
In the petition, Schottel, acting on behalf of Murphy, claims Comer used "excessive and unreasonable" force on his client, and that Comer's "conduct shocks the conscience."
The JPD is accused of negligence because it "failed to instruct, supervise, control and discipline police officers" in their duties.
According to the lawsuit, the shooting took place when Comer was attempting to arrest Murphy on a parole absconder warrant. "As plaintiff was going down on the floor on his hands and knees, Defendant Comer reached for plaintiff's right hand with his right hand, which was holding his gun, and Defendant Comer shot Plaintiff in his right wrist/hand."
The lawsuit does not mention a specific amount Schottel and Murphy are seeking, but undoubtedly they are looking for a big payday.
***
Schottel, a paraplegic, is best known for Donald Trump's television who "The Apprentice" for discriminating against the handicapped. Schottel said the show's rules were biased against handicapped applicants. At the time Schottel filed his lawsuit no one had been discriminated against:

Schottel does not claim to have been turned away yet, but his suit seeks a court order guaranteeing he will be permitted "to apply and be considered for 'The Apprentice"' in time for a casting call slated for St. Louis on Friday.

***
When you consider the risks that our police officers take on a daily basis, the lack of recognition they receive for the work they do, wages which are considerably below other far less important jobs, and then throw ludicrous lawsuits like this one on top of it, we are truly fortunate that so many good people continue to work in law enforcement.
Posted by Randy at 7:40 PM

Boy, that was a muddled mess of copy. Randy, that was really bad. I'm still wondering what the necessity of the first five paragraphs were.

I've actually been arrested my Officer Comer. I was totally compliant and he was just rude. After I was cuffed he said that he thought I wasn't going to pull over and there might have been a chase. He seemed kind of disappointed I didn't. Anyways, I'ld sum him up as a d*ck.

What was the point of the pregnant girl story? Does it have anything to do with the person who was shot? Does it really tells us anything about Officer Comer’s safety record? Are you suggesting that because police officers are underpaid and underappreciated that we owe it to them to let them accidently shoot people every so often?

Maybe the person who got shot actually caused the accident and wasn’t really hurt (as you seem to suggest) but I certainly didn’t read anything in your story that would justify jumping to that conclusion. I also think it’s pretty easy to dismiss the effects of getting shot so long as it wasn’t you or someone your care about that was on the receiving end of the bullet.

I am sure my reaction to this might be different if a family member had been shot. However, when I see that this man's lawyer is someone whose chief claim to fame is a lawsuit against a television show for discrimininating against the disabled...even before any acr of discrimination had been committed. When frivilous lawsuits like this are allowed, it is the taxpayers who will eventually suffer through the large premiums police departments have to pay and through the number of people who will decide they don't need to put up with both the hassles of police work and the tactics of bottomfeeding sharks. For complete disclosure, I might add that being the target of a $750 million lawsuit eight years ago (an unsuccessful lawsuit fortunately) obviously also colors my view of frivolous lawsuits.
Not all lawsuits against law enforcement (or journalists either, for that matter) fit into this category, but enough of them do that it is no wonder people have such a low opinion of lawyers.

You still need an editor.

Maybe just maybe if the creep hadn't been beating up his underage girlfriend he wouldn't have had the opportunity to be accidently hurt. Too bad the gun didn't hit him between the legs.

You see Randy, because of the way you wrote that story someone who didn’t have the gumption to read it carefully was mislead into thinking that the person who was shot was the person who beat up the girl, when in fact those are two completely unrelated incidences.