C. J. Huff to tell the "We Will Have School" story in Canada 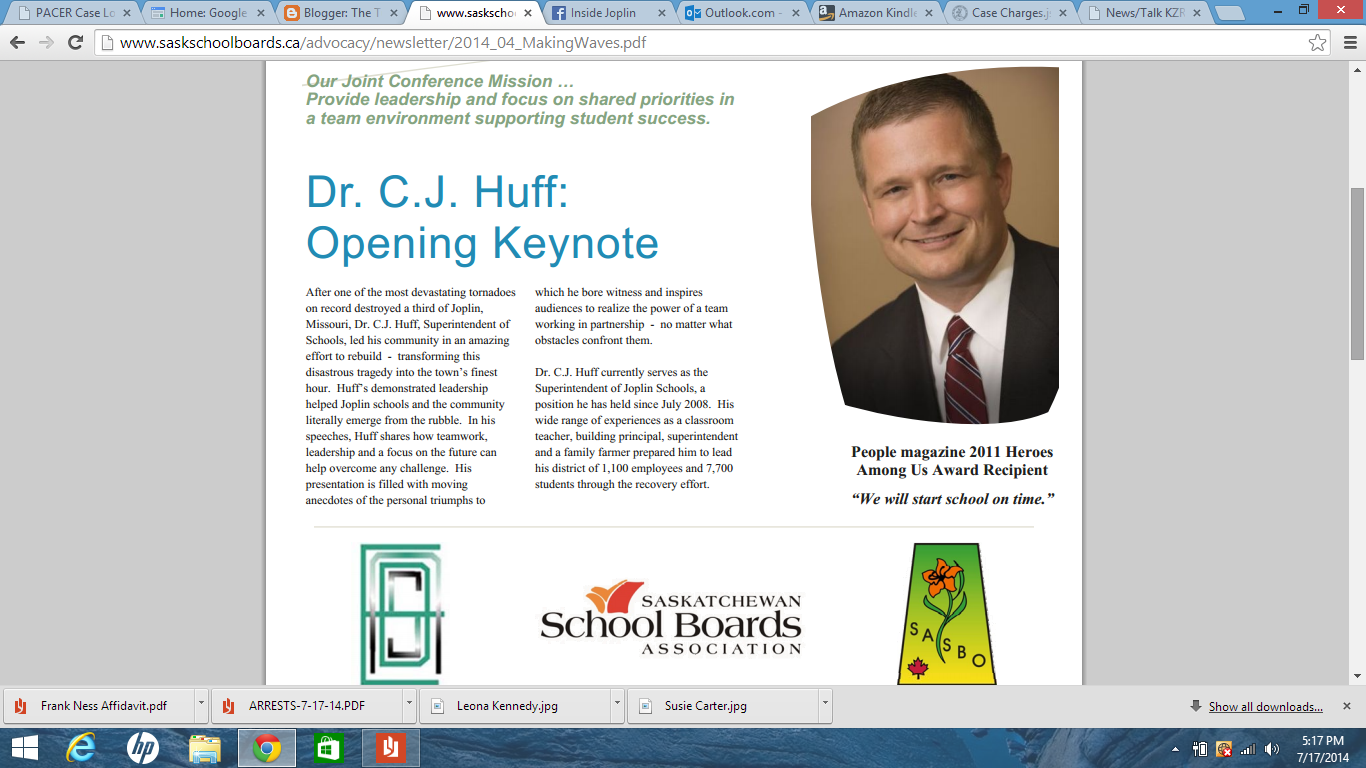 With state auditors coming to the Joplin R-8 School District and staying here for months, C. J. Huff is going to need a break now and then.

It appears that one of those breaks will take the superintendent out of the country.

Huff is being advertised as the "opening keynote speaker" for the annual 2014 Joint Conference of the Saskatchewan School Boards Association, the Saskatchewan Association of School Business Officials, and the League of Educational Administrators, Directors, and Superintendents of Saskatchewan.

The description on advertising put out by the Saskatchewan School Boards Association is the same that is used on the Washington Speakers Bureau website, but that wording has also been used to advertise Huff speeches in Missouri, such as the "Evening With C. J. Huff" that was held in Columbia in February and did not appear to have any connection with the Speakers Bureau.

The trip could be another leg on C. J. Huff's thank-you tour, which cost the district $89,000, according to an August 2013 Joplin Globe article that was rushed into print after two Joplin High School students published a blog post, complete with a recording of a Washington Speakers Bureau spokesman saying that Huff charged $8,000 per speech, plus travel expenses, and that he spoke frequently for the Washington Speakers Bureau. In that article, Former R-8 Board of Education President Jeff Flowers said the board had approved the thank-your tour.

Financial disclosure statements filed for 2011, 2012, and 2013 with the Missouri Ethics Commission and signed by Huff under penalty of perjury do now show any speaking fees. His only outside income listed on the statements was for a family house rental business in McCune, Kansas, in 2012 and 2013.

Huff could be heading to Canada to personally thank officials at the Potash Corporation of Saskatchewan, which gave $250,000 to the Joplin Schools Foundation following the May 22, 2011, tornado "to help build a state-of-the-art learning centre for Joplin, Missouri's high school and career technical school." Potash Corporation has a facility in Joplin.

The company's gift was explained in a news release:

“Today we are continuing PotashCorp’s commitment to the people of Joplin as they rebuild their community and the educational institutions that are the building blocks for a better future,” said David Delaney, Executive Vice President and Chief Operating Officer, PotashCorp.

“To achieve their true potential, our students require the best that technology has to offer young learners in the 21st century and we are grateful that PotashCorp shares our educational vision,” said Dr. C.J. Huff, Superintendent for Joplin Schools. “The new facility will greatly improve the standard of education and will prepare the next generation of our community to lead Joplin in new and innovative approaches to commerce, communications and other important industries.”
Posted by Randy at 5:59 PM

With any luck at all, they'll keep him.

Bonus audience laughter and huff tears (tm) for real if at least one powerpoint slide has PotassCorp!

Repeat at least three times to prevent embarrassing mistrakes: "it is potash not potass."

“The new facility will greatly improve the standard of education and will prepare the next generation of our community to lead Joplin in new and innovative approaches to commerce, communications and other important industries.”

REALLY? I don't think it would matter if the building were made of cinder block, qualified teachers and curriculum will improve the standard of education, NOT the facility.