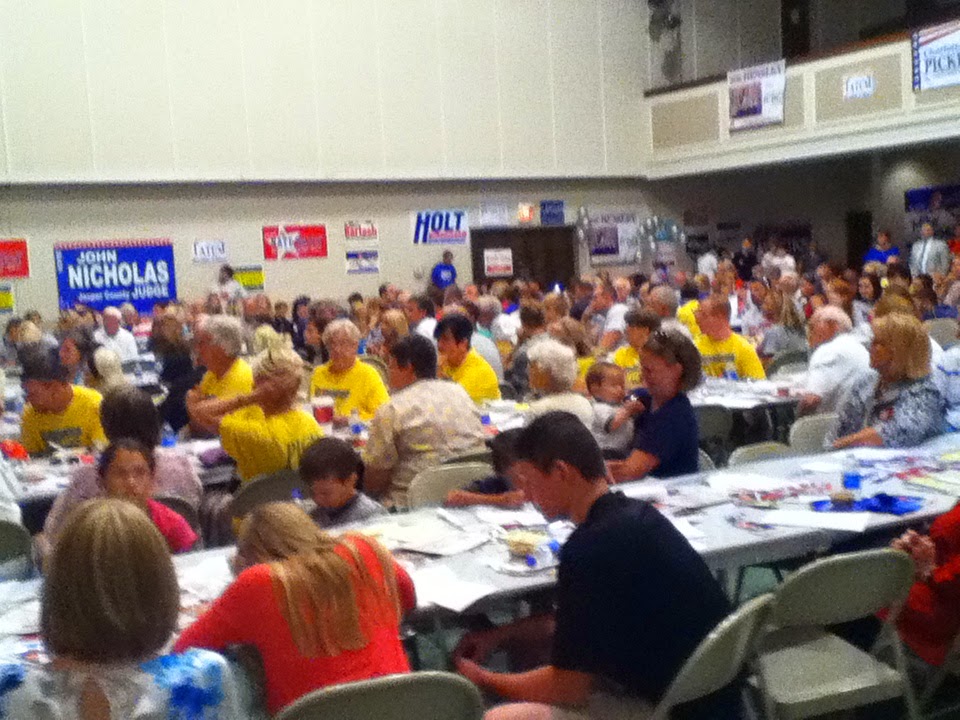 The red, white, and blue were scattered across Memorial Hall in Carthage tonight, but it was the canary yellow that captured the eye.

It was on the most visible sign mounted on a truck across from the hall as the overflow crowd poured into the building for what was billed as the last Lincoln Ladies Ice Cream Social.

About a dozen people, dressed in resplendent yellow parked themselves at a center table in front of the stage to cheer on their favorite candidate for Jasper County Recorder of Deeds, Charlotte Feather Pickering.

The word to put on the yellow "Charlotte Feather Pickering" shirts and show up early for the event had been spread earlier today via social media.

It was one of the few races Jasper County voters will decide when they go to the polls next month and it was the only one tonight in which the candidates stood in stark contrast. It was also the only one that featured anything other than candidates introducing their spouses and children, thanking the Lincoln Ladies for the platform (and the ice cream). All of the candidates, except one and that's coming up in a little bit, stressed their experience. They all said how eager they were to serve the people of Jasper County.

If only there had been a fife playing in the background, it would have been perfect.

With no incumbent in the race, the three candidates spoke in the order of where their names appear on the ballot.

Delores Tatum noted her three decades of experience in the recorder's office and the support of her two most recent bosses, Edie Neil and Donna Grove. "My extensive experience sets me apart," she said. Mrs. Tatum said the office is up to date, putting more and more things on line and suggested that if it is not broke, why fix it.

Mrs. Pickering was up next and started off the same way as nearly every candidate tonight.She loves her husband, kids, grandkids, and Jasper County, She stressed her 10 years of experience as the Sarcoxie City Collector, as well as the last 15 years working for Waco Title Company (formerly Jasper County Title Company).

Then she threw in her zinger. "And I am not a Republican in name only." Those nine words provided the only indoor heat that came anywhere close to matching the outdoor temperature.

The third candidate, Ron Hill, immediately ran into problems. He stood too far away from the microphone and many of her words were mumbled and nearly unintelligible. And after hearing from two women who both had extensive experience in the recorder's office, either as employees or dealing with documents for a title company, Hill noted his lack of experience.

Of course, he said, that can be a good thing.

He mentioned McDonald County's recorder of deeds, who had no background prior to his election, but has been there 10 years.

And he sounded sincere in his belief, at least the parts of it that could be understood.

Mrs. Pickering is a nice lady. She has a brother Tony Feathers who works as lobbyist in DC. He got his start by Gene Taylor. She has been coached well.

But there is a family trate that she carries forward like her father. It is called BIG MOUTH. She tells all........

For those not in the know like 1:38am but this link supplies some background but some of the corporate and personal information is probably out of date.


Tony Feather is a partner in Feather Larson & Synhorst DCI and served as political director for Bush/Cheney 2000. The other founding partners were Republican activists Jeff Larson and Thomas J. Synhorst.

I have been an employee of Jasper County a long time. It would be nice if the voters would cast their ballots in consideration of the candidate actually best for the job and not with whom their relatives have political connections. And in this race, a candidate that has already gone through many years of evolution in the county office as an underpaid employee is surely deserving of the position. My experience has been however, the voters are not concerned with existing dedication, but more who you know and who your family is.