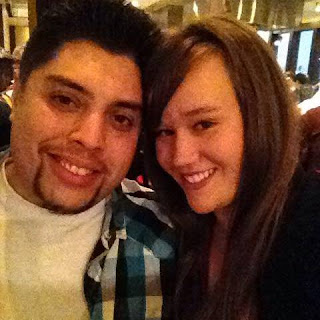 The attorney for the 20-year-old Carthage woman accused of second degree murder in connection with the death of two-year-old Emalata Hoeft does not want the trial to be held in Jasper County.

The decision on that motion may be made during the next court date, which is scheduled for 9 a.m. February 8 before Judge David Dally.

Tearra Diane Olsen pleaded not guilty during her December 21 arraignment in Dally's court.
In addition to second degree murder, Olson is charged with felony abuse or neglect of a child. She told police she slammed two-year-old Emalata Hoeft's head against a hard surface three times August 29, resulting in the child's death.

Olson was living with the child's father, Albert Steven O'Conner (pictured with Olson). She told police that Emalata Hoeft was crying and out of frustration she hit the child's head against the hard surface.

O'Conner was charged with felony endangering the welfare of a child A motions hearing is set for 9 a.m. Monday, January 11, before Judge Dally, at which time O'Conner may change his plea, according to court records.
Posted by Randy at 4:51 PM

I don't think a murder case goes by that Larry Maples asks for a change of Venue. I think he likes to travel.