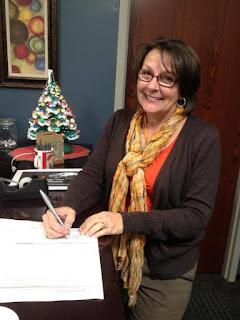 Today was the day! I am officially a candidate for The Joplin Schools Board of Education. I promise to always be available for any questions patrons may have. Here is some background information about me as I begin this process:

Lori Musser is a veteran educator, having served the Joplin School District for twenty-two years. She was principal of Columbia Elementary School when she retired in 2012. Under her tenure at Columbia, Lori, along with Columbia teachers and staff, led the effort to dramatically improve test scores and they were awarded the Gold Star School Award by the State of Missouri and also received the “Blue Ribbon Distinction” award granted by the US Department of Education. They were also recognized as a Top Ten Most Improved School by the State of Missouri. These awards, and countless hours of commitment to Joplin students, show that Lori has the background to truly represent academic excellence if elected to the Board.

If elected, Lori promises to use “old fashioned” common sense in all decisions, control spending, vote no on any tax increases, focus on retaining high quality teachers and staff, and will always be available to patrons to ensure communication is fluid.

After twenty-five years of service in public schools, Lori now serves students at Missouri Southern State University as the Coordinator of Disability Services.
Lori is very active in the Operation Fairy Godmother program that serves local high school boys and girls and is also hoping to serve more children by becoming a Court Appointed Special Advocate (CASA) volunteer in the near future.

Lori has been married to her husband, Kevin, for thirty-four years. Together they have raised their two children and now enjoy their two grandchildren. Lori attends Carterville Christian Church.
Posted by Randy at 9:44 PM

My favorite line in her bio: "Under her tenure at Columbia, Lori, along with Columbia teachers and staff....." they were a team. Together they raised the test scores. This is obviously someone that appreciates teachers and knows about the education system. We are very fortunate that there are people like this willing to step up and help get Joplin back on track.

Another former teacher who thinks they know how the school district should be run. Maybe she should start a blog instead.

As a parent of a child who had Mrs.Musser as a principal I would never vote for her. She was a horrible principal. She was not friendly to kids or parents. My son was threatened to be shot by another student then stabbed because he and another student told what happened. What does she do about it? NOTHING! She tells us parents he had a bad home life. I'm sorry that is no excuse. The kid brought a bullet to school! She lied to us parents and told us 2 different stories. I pulled my son out after the 2nd grade and moved him to another school. Vote no for Musser!

10:47 AM: Did this happen when CJ Huff was Superintendent? If so, she probably didn't have the option of getting the perpetrator expelled, but in no way was it acceptable for the principals who kept their positions to play CJ Huff's games with the safety of students and teachers, and her abhorrent reported behavior is not the sort of example we expect people like her to provide for students.

Hey Randy, has anyone else filed?

10:47 go back to watching Jerry Springer

We are a family of 4 voters and Mrs. Musser will receive all 4 votes! Good luck to you.

And we are a family of six and we will cancel your votes out. No freaking way I vote for this lady, you have got to be kidding me.

There are always two sides to every "story." I am supporting Mrs. Musser 100 percent. She was a great principal and will be a great board member.

Sorry never watched Jerry Springer, but apparently you do. I work for what i have.

Perhaps if you had any respect for education you would grasp number agreement in your use of nouns.

2:47: that the best you got? What a slow, half-witted response. Thanks for playing....move along now troll. ;)