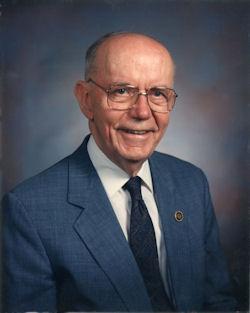 Gov. Jay Nixon today ordered that the U.S. and Missouri flags at government buildings in Barry County be lowered to half-staff to honor former state Sen. Emory Melton on Tuesday, Dec. 29, the day of his funeral. Sen. Melton, who represented southwest Missouri for six terms in the state Senate from 1973 to 1996, died on Dec. 26.

“Emory Melton had many titles during his life – longtime state senator, attorney, newspaper publisher and historian, and especially loving husband and father,” Gov. Nixon said. “He had a deep love and respect for the natural beauty of the Ozarks, and was a leader in preserving that beauty for future generations. I was honored to serve alongside him in the state Senate for six years, and to learn from him. My thoughts and prayers, as well as those of the First Lady, are with his family and friends in mourning his passing.”
Posted by Randy at 6:22 PM