Judge: It is unfortunate taxpayer dollars will be used to pay for (C. J. Huff's) failure 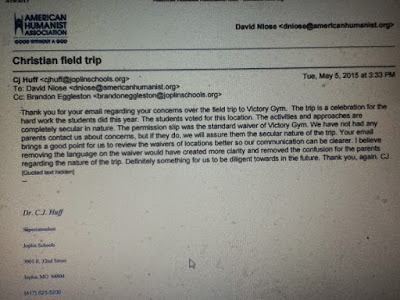 U. S. District Court Judge Douglas Harpool brought the Victory Ministries field trip lawsuit to a conclusion today by ordering the Joplin R-8 School District to pay $147,435 in attorney fees to the lawyers representing Jane Doe, considerably less than the $211,000 they were seeking.

In his order, Harpool noted that the lawyers had won the case, but not had prevailed on every issue that was brought before the court.

The judge also had harsh words for district officials who he noted had every opportunity to avoid the lawsuit after the district was put on notice before a May 2015 North Middle School MAP celebration trip to Victory Ministries and Sports Complex:

(The) Court also considered that the Defendants had every opportunity to avoid this lawsuit. Defendants were put on notice far in advance of this litigation of the issues raised by Plaintiffs, but failed to proactively address or eliminate the problem with the consent and waiver form. The Court finds it unfortunate that in this case the taxpayers’ dollars will be used to pay for the Defendants’ failure to identify and correct this legal issue without the cost and expense of litigation.

Though the name of former Superintendent C. J. Huff was not mentioned, it was Huff's decisions, or lack of decisions, that led to district money being used not only to pay Jane Doe's attorneys, but also the attorneys who represented Joplin R-8.

Huff received an e-mail from a lawyer for the American Humanist Association warning that the field trip would be a violation of the First Amendment's Establishment Clause. The primary problem was the decision to use parental permission slips provided by Victory Ministries which gave permission for its employees to proselytize the students and also allowed Victory to take photos of the students that could be used in its advertising.

In his e-mail response, Huff acknowledged there was a problem with the permission slip, but only said a better one would be used the next time. Victory officials told Huff they had no problem with having a different permission slip, but no replacement slip was ever given to the students and instead of sending the students to a different destination, Huff allowed the field trip to continue, a decision that led to today's $147,435 decision.

Harpool's final decision, while going against the district, does not prevent the district from scheduling field trip to Victory Ministries or other religious venues. The judge set guidelines that have to be followed if such a trip is made, including the prohibition of religious messages from employees and workers at the facilities will not be allowed to use photos or video of the students to promote their facilities.

Jane Doe sued on behalf of her children and was allowed to remain anonymous for her protection. The judge awarded her $1 in damages as she requested.
Posted by Randy at 10:17 PM

Huff...the gift that keeps on giving...

Did you find out how much the district's attorneys billed for?