The lawsuit, which was filed by Scott Webb, alleges a pattern of racist behavior in his department dating back to 2013 and claims his complaints about the harassment were ignored, first by former H. R. Director Tina Smith and later by Sachetta.

According to the petition, Webb had to endure the following: 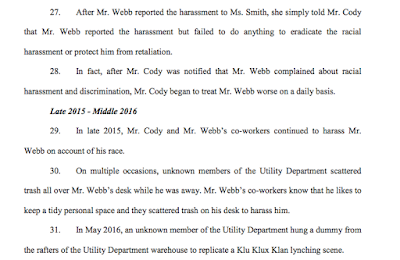 -The hanging of a dummy with his name on it simulating a lynching.

-Webb was required by his lead man to bring him coffee every morning, something that was not required of any of the other workers

-Webb was required to start all of the trucks on cold mornings, something that was not required of any of the other workers

-Dreadlocks were drawn on a photo of an African-American male and left it on Webb's desk. (Webb also has dreadlocks.)

-Monkey figurines were left on his desk.

If Webb's allegations prove to be true, he followed the same pattern followed by others who followed district guidelines and took their complaints to Tina Smith's human resources department. Nothing was done about the complaints and the harassment increased.

From in or around late 2013 through early 2014, unknown members of the Utility Department left monkey figurines on Mr. Webb’s desk. Upon information and belief, this was done in an effort to dehumanize Mr. Webb by comparing him and members of the African American race to monkeys.

In 2014, after Mr. Webb discovered the monkey figurines on his desk, he reported the racially-motivated harassment he had suffered while working in the Utility Department to Tina Smith, the head of the JSD Human Resources Department.

After the first complaint, which was filed in 2014 Webb said, the harassment increased, culminating in the incident with the simulated lynching scene.

After that incident, Webb once again complained to Tina Smith.

Following the dummy incident, Mr. Webb reported his co-worker’s racially hostile behavior to Ms. Smith for a second time. Ms. Smith did not investigate Mr. Webb’s complaint of a hostile work environment and failed to take any remedial actions whatsoever.

Shortly after Mr. Webb reported his co-worker’s racially-motivated harassment, Ms. Smith resigned from her position and Kerry Sachetta took over as the head of the JSD Human Resources Department. Upon assuming his new role, Mr. Sachetta took control of the investigation into Mr. Webb’s complaints of racial harassment and hostile work environment.

Mr. Sachetta told Mr. Webb that the racial harassment to which he had been subjected was mere “horseplay” and he and Mr. Cody should “have a handshake” and move on.

After that, the harassment once again increased. His car was keyed by an "unknown utility department worker" and the weed whacker he used every day was altered "to render it more dangerous."

Webb says that Cody refused to talk to him and "required another Utility Department employee to relay messages back and forth."

Webb, who is the only African American in the Utility Department said he "has consistently been subjected to a hostile work environment from Mr. Cody and his co-workers.

The two-count lawsuit accuses the district of racial discrimination and retaliation.

Webb is asking for a jury trial.
Posted by Randy at 7:53 PM