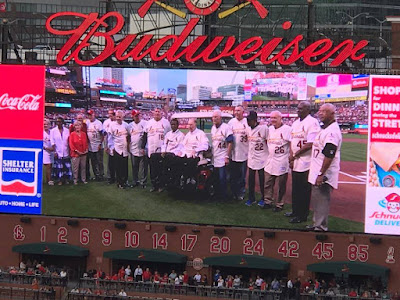 Though they played in the days before Fox Sports Midwest and night time World Series games, the 1967 St. Louis Cardinals were still able to capture the imagination of an 11-year-old sixth grader in Newtonia.

I had listened to Cardinals games on either KOAM Radio (86 AM) or KMOX since I was six, catching the last two years of Stan Musial's career and listening to the best baseball announcing team ever created-  Harry Caray and Jack Buck.

In 1964, I listened on a Sunday afternoon as the Cardinals clinched the National League pennant on the last day of the season.

The next two years were miserable, but on May 8, 1966, the Cardinals traded pitcher Ray Sadecki to the Giants for first baseman Orlando Cepeda, taking a major step toward creating the 1967 World Champion team.

The new manager was former Cardinal Red Schoendienst, which was a thrill for me because the first glove I ever owned, was a reddish-brown Schoendienst model.

You rarely saw games on television in those days unless the Cardinals happened to be selected for the game of the week, but that spot was usually reserved for the Yankees and back in those days the only interleague games took place in the World Series and during the exhibition season.

So with the help of Harry Caray and Jack Buck and magazines like the Sporting News and Baseball Digest, I was able to "see" the games through the magic of radio and had an idea of what the players looked like.

I listened the evening the  Pirates' Roberto Clemente hit a line drive off Bob Gibson's leg. Gibson retired the next three batters, then left for the disabled list. He had pitched a complete inning with a broken leg.

Even with their best pitcher gone, the Cardinals ran away with the pennant, finishing 10 1/2 games ahead of the Giants and in those days before playoffs that meant an automatic ticket to the World Series.

Thanks to my sixth grade teacher, Mrs. Jean Rowe, I was able to take a transistor radio to the back of the room and listen to the games. Everyone wanted to listen, but Mrs. Rowe, knowing that most of them would not get their work done, devised a surefire method of diffusing a potentially serious situation. Students who wanted to listen to the World Series had to prove they knew enough about baseball and about the Cardinals and their opponents, the Boston Red Sox.

Three of us passed that test. So we did our work, listened to the game and reported to the rest of the class when anything happened.

I thought about that wonderful team and those players of yesteryear like Gibson, Lou Brock, Curt Flood, Cepeda, Roger Maris, Julian Javier, Mike Shannon, Tim McCarver, and Steve Carlton earlier this week when the Cardinals welcomed back the World Champions of '67 and honored them during a pre-game ceremony.

As the remaining players and their manager, Schoendienst, 94, were introduced, I watched these much older men, long past the days of playing games, as they magically erased the intervening half-century and basked once more in the adulation of St. Louis fans who may not have seen them play, but who have heard the stories and seen the black-and-white videos of their exploits.

The 80-year-old Gibson stood several feet in front of the pitching mound as he threw out the first pitch to his longtime catcher McCarver. (Pictured below)

In my mind, I saw them the same way as I imagined them 50 years ago and heard those long-silenced voices of Jack Buck and Harry Caray, as clear in my mind today as they were five decades ago

And I remember sitting in the back of a sixth grade classroom, thinking how great it was to be able to listen to the World Series on a transistor radio and not having to miss it because I was in school.

I have always appreciated the kindness Mrs. Rowe showed when she provided me with that special memory.

I wonder if the memories 50 years from now will be that special for today's 11-year-olds. The games are all on television or on their favorite mobile devices and their imaginations are totally left out of the equation.

They will never know what they are missing.

(The photos are provided courtesy of Jake Reynolds.) 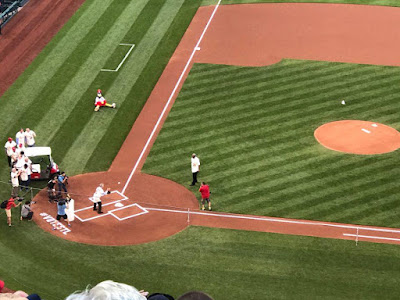 Sweet story, Randy. I grew up listening to Jack and Harry with my uncle on his back porch in Granby. Maybe I'm just a middle-aged purist, but I still would rather hear a game than see it on TV.

One of the best quotes about anything, ever, came from Tim McCarver. He called Bob Gibson the luckiest pitcher on the planet because he only pitched on days when the other team didn't score any runs.

Gibby and Steve Carlton in the same rotation. Wow.

Great writing. You made me see it. I enjoyed this probably more than any other story you've ever penned.