Thoughts on the making of the Joplin middle school basketball decision 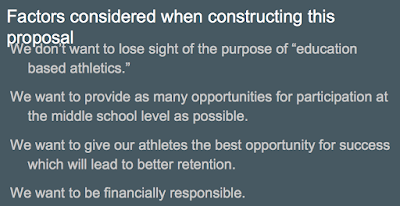 The decision to combine the Joplin R-8 middle school basketball programs, which was approved by the Board of Education on a 6-1 vote Tuesday night, may have been the only reasonable option left for the district.

As Assistant Athletic Director Matt Hiatt noted during his presentation, Joplin is entering a new conference where the individual middle schools, East, North and South, would be the smallest schools, if basketball teams continue to be fielded at each school.

That being said, the approach taken by district officials to reach their recommendation to the board is concerning and is reminiscent of the approach used not only by the C. J. Huff Administration, but also by the CART (Citizens Advisory Recovery Team), that steered the recovery plans for Joplin following the tornado.

During the years after the tornado, the Huff Administration and CART developed ideas of what they wanted to do, then brought together "stakeholders," and guided them in the direction they wanted.

Perhaps district officials provided other options during these sessions that they did not include in their board presentation. Were approaches to building participation at the individual middle schools discussed?

This passage was featured in the power point presentation to the board:

This proposal was created by working with district administrators, high school head coaches, middle school head coaches, community members, and parents.. All groups have had input on the proposal. We have had meetings with both groups of coaches. JHS head coaches made a proposal for each of their programs after working with middle school coaches. We reviewed these proposals and made changes as necessary. The Joplin Athletics Booster Club has viewed, commented, and approved of the proposal. The District Parent Forum has viewed, commented, and supported the proposal.

This is not reassuring.

If this was something that had to be done in order to cut costs, that would be a different situation, but the amount of money saved by eliminating two programs was not nearly as much as one might think, just slightly more than $2,000.

Under the proposal, Joplin would field, A, B, and C teams, though the C team will be called the "junior varsity" and will play games against the A and B teams. C team players will also have the opportunity to advance to the A and B teams.

No matter how you look at it, some students who would have received playing opportunities in the past will lose them under the new plan.

To provide those students with basketball experience, the district will dramatically increase its intramural program, with an eye toward teaching students the same fundamentals they would need to succeed on the A, B, or C teams.

The worry that those skeptical of this plan have expressed is that no matter how legitimate the plan is, students are not going to receive the same level of instruction as they would with the A, B. and C teams and are more likely to abandon basketball for other pursuits, some of which may not be as wholesome.

The district has the burden of making this intramural approach work and providing an avenue for late developers to be able to play basketball at a higher level and for all students to be able to enjoy participation in a positive after-school activity.

The way the decision was reached is more of a concern.

Obviously, school officials cannot take the time to go to "stakeholders"  on all decisions or they would never get anything done.

Perhaps this idea of going to "stakeholders" is part of the problem. The word depersonalizes the people whose pocketbooks and whose children's lives are affected by the decisions. Why don't we call them parents and taxpayers?

When we talk of stakeholders (and school officials everywhere seem to be doing it these days), it has an impersonal, institutional feel to it.

When we speak of parents, we are more forcefully reminded that whatever decisions are made should always be about the children.
Posted by Randy at 7:42 AM

Going out on a limb here. Joplin will still get beat by Webb, Carl, and Carthage...No matter what level or sport, no matter how you configure it...it's a lack of athletes.

So to say we will never beat those schools is completely untrue. But don't let the facts get in the way of your narrative of a lack of athletes.

A lack of students willing to be self disciplined enough to be on a team.

Will they combine schools for all sports? By doing so the number of students able to play will decrease. The only students playing will be children of booster members.

Sorry but the "everybody plays" mantra ends with youth sports. Meaning sixth grade.

1106- So you are saying that the varsity teams should be chosen 5 years out? Good luck with that. I bet if you ran this by professional sports personal or college coaches they would not agree with any of this. Reducing competition so early will not help, unless ones goal is to insure little Johnny a spot on the team.