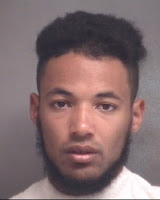 A Joplin man had sex with a runaway 16-year-old girl in a local motel and made videos of the act, according to a detention motion filed today in U. S. District Court for the Western District of Missouri.

In the motion, Assistant U. S. Attorney James J. Kelleher asked that William Lee Potts, 21, be held without bond while awaiting trial.

The motion was granted by U. S. District Court Judge David P. Rush during a xix-minute hearing held this morning in Springfield.

Potts waived the reading of the grand jury indictment and entered a not guilty plea.

According to the detention motion, Potts brought the teen from Waynesville to Joplin.


The grand jury indictment charged Potts with using the girl to produce child pornography between April 26 and May 1. He was found in the motel room with the girl May 1. Investigators searched his cell phone and found sexually explicit images and a child pornography video.