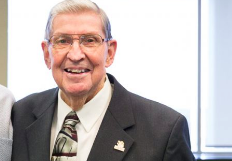 Visitation will be held 10 a.m. to 12 noon Tuesday at the church.

Dr. Dolence was vice president for student affairs and formerly served as the dean of men.

He retired in 1996 after serving at the university for 27 years.


Dr. Dolence's influence at Missouri Southern has continued through the years because of the mentoring he gave to those who followed him, current vice president of student affairs Darren Fullerton said at a a November 2017 ceremony naming the Student Affairs Suite on the third floor of the Billingsly Student Center after Dr. Dolence and his wife Myrna.

Southern's annual Leadership/Service awards are named after Dr. Dolence, who said he believed in former President Harry S Truman's saying- "it's amazing what you can accomplish if you do not care who gets the credit."

A complete obituary for Dr. Dolence will be posted later on Inside Joplin Obituaries.