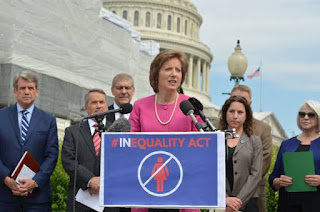 “This bill should be called the IN-equality Act. There is nothing equalizing about it,” Hartzler said. “It hijacks the Civil Rights Act of 1964 erasing decades of progress for women across the country, punishes everyday citizens, silences free speech and discriminates against people of faith. Americans have the right to live and work according to their beliefs, without the federal government mandating how they should view marriage, human sexuality and gender.”

H.R. 5, the misnamed “Equality Act,” was introduced by Rep. David Cicilline (D-RI). The legislation amends multiple civil rights laws by adding sexual orientation and gender identity (SOGI) as protected civil rights classes, including fluid sexual preferences and self-declared gender identities. If an individual or entity is perceived to have violated these new protected civil classes, he or she can receive civil penalties, monetary fines or even imprisonment.

This new expansion of protected classes in the so-called Equality Act would have the following effects:


Sex-specific domestic violence or homeless shelters, locker rooms at gyms and schools, showering and restroom facilities will be outlawed. Any place of public accommodation and any entity that receives federal funding will be bound by H.R. 5’s new definition of sex. For examples, read about the Downtown Hope Center or the Poverello House.

Women’s and girl’s athletics will be subverted by men and boys transitioning to female, or even those who might falsely claim to be women.

Under H.R. 5, employers would be required to recognize gender identity over biological sex when making employment decisions where sex is considered a bona fide occupational qualification. Employers could no longer base hiring decisions where biological sex is a necessary consideration, such as when hiring TSA agents to administer pat-down searches on female passengers, teacher monitoring locker rooms or bathrooms for elementary girls, guards in women’s prisons, or doctors providing intimate medical exams on women.


Employers offering health insurance, regardless of the organization’s mission, would be required to cover sex reassignment surgery. Religious charities like Little Sisters of the Poor could not opt out of this requirement or take such a case to court.

Family-owned businesses, like Jack Phillips’ Masterpiece Cakeshop or Barronelle Stutzman’s Arlene’s Flowers would be required to celebrate same-sex unions and transition procedures.
“Misgendering” or using the wrong pronouns to describe an individual could be considered harassment and could cost an employee his or her job. For an example, read about Virginia high school teacher Peter Vlaming.

By amending Title IV of the Civil Rights Act, the ‘desegregation of public education’, the Equality Act would pressure K-12 schools to teach gender fluid and self-affirming gender identities as part of the sex ed curriculum.

Under H.R. 5, the medical profession will not have the option to guide kids experiencing gender dysphoria through puberty without prescribing puberty blockers, cross-sex hormones, or even surgery. As a result, parents who fail to affirm their child’s gender identity will not be able to find appropriate medical care and may lose custody of their child. This has already happened in Ohio - read about it here.

Faith-based foster care and adoption care agencies that prefer child placements with a mother and a father will be labeled “discriminatory” and be forced to permanently closed. This is already happening in states and cities that have adopted SOGI laws and ordinances (see Kids Deserve More for ongoing SOGI lawsuits in Michigan and Philadelphia).

Provides a universal right to abortion, compromises taxpayer safeguards against funding abortion, and eliminates conscience protections for health care providers who do not want to participate in abortion.
Posted by Randy at 3:35 PM

Gender is a myth. Sure in a pure scientific sense there are male and female but actuality gender is an outdated concept that has been pushed upon us in the form of societal norms. Those norms have no place in our evolved times. So, that person has a penis and that person has a vagina, why can't they use the same public restroom or shower together? Why did the old outdated norms obsess on the act of sex so much? Just because an exposed vagina and exposed penis are in the same room does not mean everyone is thinking about sex acts.

Ok.
Gender is a myth? You know, why not? Let's do away with gender specific restrooms and locker rooms. Sounds good. What's the worse that could happen?

They had gender neutral restrooms in Japan and nothing seemed to be taking place out of the norm of them being used other as intended. Our Puritan beliefs are outdated, but because most conservatives are perverts they cannot separate the fact from fiction. One only has to look at the types of sex crimes being committed in our area are by ministers of one kind or another. I fear the US is locked into a failed battle to create equal opportunities for all and it will cause our society to fold like a cheap kite. We are being led by a group of crisis inventors who follow in the footsteps of a failed German group that started in the 20-30's that led to their downfall. We are slowly alienating a small group against the larger more intelligent and tolerant group of center and left leaning persons. Too bad, it was a good experiment, but due to small minded people it is destined to fail now.

Oh my gosh!
That whole thing is ridiculous.
Male and female. PERIOD!
I don't care what they do in Japan and I don't care if you think it's "evolved" or not, men and women don't need to share bathrooms, locker rooms or dressing rooms.
Whole lot of ick there.

In so many ways your objections are hollow considering what your pervert (POTUS) has done to other women and then he brags about it and you support his behavior. Hiring prostitutes when his wife is pregnant is the ultimate and yet you condone his behavior and back him fully. One only has to look at republican lawmakers in Missouri to see that your party is rife with perverted men who take advantage of their college interns. So much of your banter is aimed at good people who actually believe you have points to protect and enhance when it could not be further from the truth. Lies do not do justice when they are aimed at the very people who elected you to be fair, honest and above corruption. Taking bribes(campaign donations is one form of bribery) is not what you were sent to Congress for and you should be outed as perform another type of prostitution for hire.

@2:04, the Nazi is way overplayed. By your comment it is clear that you have no firm grasp of how or why the Nazi party came to power in Germany.
By the way, over the past few years there ha e been as many teachers in our area commenting sex crimes as ministers. What does that say a out our public schools?

4:17, what does your post have to do with the topic? Your babbling adds nothing to the conversation.