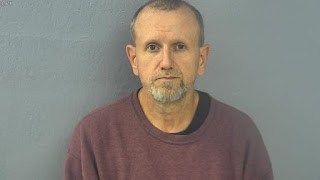 The live-in friend of a Joplin babysitter was charged in U. S. District Court for the Western District of Missouri Wednesday with receiving child pornography.

The Joplin Police Department's investigation into allegations against David Pierce, 51, Joplin, began after a hotline call was made about a seven-year-old boy's inappropriate actions at school, according to the complaint.


(Note: This post has been edited to remove references in the headline and the opening paragraph to Pierce being the boyfriend of the babysitter. Though the reference came directly from the court documents, multiple sources have confirmed to the Turner Report that Pierce was not the babysitter's boyfriend, but was staying with her temporarily.)

Under questioning at the Children's Center, the boy said he had watched videos of sex and graphically described their content and that his babysitter, Dave, had showed them to him on his phone while the boy was at the babysitter's house, the complaint said.

The babysitter acknowledged that she took care of the boy, as well as another boy.

Pierce denied showing the boy pornography, but he said he let the seven-year-old use his phone to play games and watch YouTube videos.

When Detective Adam New asked Pierce if he had fondled the boy, Pierce "replied that he never intentionally touched (the boy) inappropriately."

Questioning of the second child indicated Pierce had shown that boy pornography, as well, according to the complaint.

After obtaining a search warrant, investigators did a forensic examination of Pierce's phone and found 1,217 child pornography images, the complaint said.

Preliminary hearing and detention hearing for Pierce are scheduled for 2:45 p.m. Monday at the federal court in Springfield.
Posted by Randy at 9:58 PM

you might want to check your sources. He was a family friend not anyone's boyfriend and the boy was 8 not 7.

Is the age important??

Why can't these perps find other ways to get their kicks that don't involve ruining a kids' life?

1:56. Because the punishment doesn’t fit the crime.

What do you mean it doesn't fit the crime?

There is no punishment too great for what he did, and the age makes no difference. He has destroyed the innocence of these precious boys and no telling how many more. Lock him up and toss the key.

They end up doing little time. The victims have a life sentence living with it. The punishment doesn’t fit the crime.