Deaths of beloved doctors, violent tornadoes among most visited Turner Report/Inside Joplin posts for the week

During a week when Inside Joplin Obituaries posted its 9,000th obituary since launching in November 2013, the traffic to the blog was heavier than usual and that can be attributed to the passing of two people who devoted their lives to helping others.

Dr. Donald Patterson was a fixture in the Joplin medical community for six decades, but his service extended far beyond that.

Dr. Patterson's 91 years were filled with accomplishments and have had a lasting impact on this area. 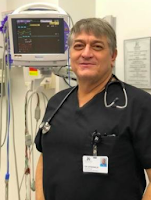 The same can be said for Dr. Timothy Sprenkle, whose skills as an emergency room physician were responsible for saving countless lives before his untimely passing this week at age 56 as a result of a system weakened by a series of bites from a brown recluse spider.

I cannot even imagine the pressures of being an emergency room physician, but it was something that Dr. Sprenkle handled skillfully for nearly 30 years.

Both men left behind a legacy of service and will be missed.

While the deaths of Dr. Sprenkle and Dr; Patterson were the most visited posts on Inside Joplin Obituaries, the violent tornadoes that ripped through this area of the state and Jefferson City naturally received the most interest on the Turner Report and Inside Joplin.

Each year since the Joplin Tornado, I have revisited some of the posts I wrote eight years ago, but not this year.

The tornadoes hitting on the anniversary of the Joplin Tornado were the only ones I was going to mention on that day. Any retrospectives can wait until a May 22 when the sun is shining brightly or the stars are blanketing the sky.

I was more than mildly irritated by the national media's constant mentions of the Joplin Tornado when talking about the storm that killed three Golden City residents.

While the anniversary made it a natural news hook, Golden City is more than a half hour away from Joplin.

I had the honor of being the final editor of Golden City's last newspaper and it is Golden City that is suffering through this tragedy and not Joplin, though we, of course, can certainly understand what the residents are going through.

Golden City is a great community, now as it was when I was there in 1979 with the Lockwood Luminary-Golden City Herald.

The Top 10 most visited posts on the Turner Report, Inside Joplin and Inside Joplin Obituaries and links to each of those posts are featured below:

5. Department of Public Safety: Nine hospitalized in Jefferson City due to tornado, not the 100 that had been reported

7. CNN coverage of Missouri tornadoes- eight years to the day after Joplin Tornado

8. Parson to meet with Briarbrook residents this afternoon, spoke to family members of those who were killed in Golden City

10. Neosho man taken to Mercy Springfield after being seriously injured in fiery accident

Have to part company with you on this one, Randy. I read the Facebook comments from the TV stations' Facebook Live storm coverage Wednesday. The anniversary was on a LOT of people's minds. The Galena tornado threatened Joplin and went near the Joplin airport. It was a Joplin story, too. If the media gets called out for mentioning the anniversary, so should a lot of locals. So should I.