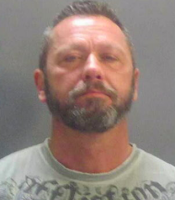 A former Joplin police officer was handed a suspended sentence and placed on supervised probation for five years Monday for on a charge of second degree assault.

As part of a plea agreement, Brady Stuart pleaded guilty February 25, with the Jasper County Prosecuting Attorney's office dropping two felony charges of endangering the welfare of a child.

Stuart, who worked for the Joplin Police Department for 12 years, was driving drunk November 22, 2016 in Webb City when he crashed into another vehicle injuring one of the two children who were in his vehicle with him.

After Judge Gayle Crane accepted the plea agreement and imposed the following conditions:

-Stuart has to submit to drug testing every other week for the first 90 days, then submit to random drug tests to be conducted at the discretion of his probation officer.

-An ignition interlock device has to be installed on any vehicle Stuart drives for 90 days.
Posted by Randy at 7:13 PM