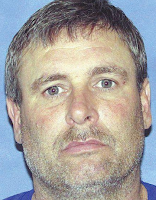 (UPDATE: A jury found Johnny Russow not guilty following the second day of the trial.)

Witnesses in the first day of testimony in the statutory sodomy trial of former Diamond R-4 Board of Education member Johnny Russow claimed Russow was having a lengthy affair with a local woman during the same time period he was molesting the woman's underage daughter.

Russow made sexual advances on the alleged victim, who was a friend of Russow's teenage daughter, even during times when the daughter was also there, according to Joplin Globe reporter Jeff Lehr's account in today's edition. One of those occasions was during a camping trip:

(The alleged victim) had retired for the night with her sister and Russow's daughter when Russow entered their tent, ostensibly with the intention of "givin' lovins" to his daughter. But while he was kissing and hugging his daughter, one of his hands was reaching behind him and rubbing her crotch, she told the jury.

According ot her testimony, the girl, who was 15 and 16 during the times of the alleged crimes and is 20 now, later discovered her mother was having an affair with Russow and came forward because of her disgust with him.


The mother testified she had an affair with Russow that lasted three years, but broke it off after hearing her daughter's accusations.

In his opening statement, Russow's attorney, Jonathan Pierce said the alleged victim was infatuated with Russow and when she found out he was having an affair with her mother, leveled her accusations against him.

The trial is expected to conclude today.

Is that your experience in prison?

You have to be kidding me.....overwhelming evidence and he gets off. Feel so sorry for the girl he raped. Just awful.

Why not guilty? He did the crime, now it's time for him to do the time.

Well dude this is 12:44. Go ahead and gloat....that your buddy raped a teenager and got away with it. We all know what happened by hearing the evidence presented. This paints a picture of what he really is. Just because he was acquitted doesn't mean he isn't guilty. Guess I will just take solace in the fact he ruined his own life and will be forever remembered as a child molester.

What a sad day it is when justice does not prevail. My prayers go out to the victim and family who have lost so much of their lives to such a terrible thing that was done to them. I am a firm believer that we will pay here on earth or we will pay later.

How are all of you so positive he is guilty?