By the time I was working at the Carthage Press, it had been more than  two decades since I had been called into the principal's office.

That happened one day in the early '90s when I arrived at a local school to make my regular rounds.

The visit came a couple of days after I began printing the information school districts provided to the state as part of their mandated annual reports.

I did not editorialize about these reports, I printed them exactly the same way the districts submitted to them to the state and this particular district had some items in its report that did not reflect well on the school.

It was not a case where district officials had not been given an opportunity to explain the situation. It was explained in the report and I really had not seen any problem with the explanation.

So I was surprised when I entered the building and was told to report to the principal's office.


There were no pleasantries exchanged after I was called in. The principal began lecturing me about the damage I had done by printing word-for-word what district officials put in their report to the state.

"Nobody reads those," he said. "Now we have people calling us about this."

And that was the problem.

There are many reasons why newspapers have traditionally published public records. Marriages, divorecs, land transfers, public meeting minutes, court filings, bankruptcies, arrests- these are all part of the everyday news of a community.

Many times, that brings complaints.

I remember having someone call me occasionally when I was at the Press or the Lamar Democrat asking that a divorce or a marriage license or a speeding ticket not be printed or jumping all over me because it was.

That did not happen that often, however, because in those days people knew their divorces, their marriage licenses and their arrests were going to be printed in the paper.

That is no longer the case.

That was really brought home to me this week when I received a number of complaints about the items I post on Inside Joplin.

A Facebook commenter said it was "rude and hateful" for me to print dissolutions because it was "newspaper information, not social media information."

I am curious as to what that means.

First, I would like to know just what newspapers are still publishing this information. Not very many, sadly. As staffs have been cut, this information, the information that kept readers coming back day after day, month after month, year after year, can no longer be found in many papers that still claim to print local news.

The woman's argument seemed to be the same as the high school principal's was when he called me into the office- it's all right to post public information as long as you post it where no one will read it.

I also received an e-mail from someone in Springfield asking that his bankruptcy be removed immediately.


But last night was the kicker. I posted Jasper County marriage licenses, something I have done regularly, usually on a weekly basis, for the past few years.

I pointed out on Facebook that the list included a local media celebrity and all hell broke loose.

I wasn't trying to harm anyone or damage any reputations. I thought a marriage license was a sign of a joyous event.

The local media celebrity was not pleased. I won't go into detail, except to say that I apparently ruined a surprise.

That was not my intent.

One Facebook commenter scolded me for mentioning that a local media celebrity's name was on the list, accusing me of trying to get more readers and noting that I normally did not put anything like that when I posted the marriage licenses link.

That is exactly what I was doing.

I assumed, correctly, that people would be interested in reading this and as it turns out I was right. The Jasper County marriage licenses post was the most visited post on Inside Joplin this week.

As always, I was accused of using the local media celebrity mention as click bait.

People who accuse me of that are off base and do not know what click bait is.

Click bait is when you lure people into going to a site by misleading them and usually provide a wasted experience.

The people who clicked on my post found exactly what I promised and it appears that many who did not realize I have been posting marriage licenses is now aware of it because of this particular post.

I do not expect anyone who thinks this information is personal and is no one else's business to ever come around to my way of thinking.

Many of you have left me know that you appreciate having this kind of information readily accessible.

I intend to keep posting it.

Signing for Lost Angels next Saturday at Pat's Books in Carthage 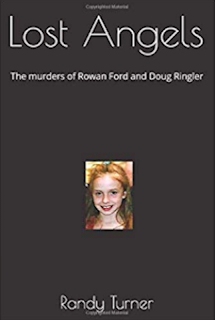 The next signing for my book, Lost Angels: The Murders of Rowan Ford and Doug Ringler, is scheduled for 12 noon to 2 p.m. next Saturday, June 15, at Pat's Books in Carthage.

In addition to Lost Angels, copies of my other books will be available and there will even be some Turner Report t-shirts.

Stop by and check out Pat's Books' large collection of quality used books and videos.

Lost Angels is also available at Always Buying Books, Changing Hands Book Shoppe and the Book Guy in Joplin and at Granby Auto Supply and Hardware and in paperback and e-book formats at Amazon.com.

The top 10 posts this week for the Turner Report, Inside Joplin and Inside Joplin Obituaries and links to each of those posts are featured below:

3. Complete Highway Patrol school bus inspections reports- How did your district do?

***
Thanks for supporting the Turner Report/Inside Joplin and helping to keep news, commentary and investigative reporting alive in the Joplin area. Subscribe or leave a contribution at the PayPal buttons below or mail your contribution to Randy Turner, 2306 E. 8th, Apt. A, Joplin, MO 64801

7. Carthage Police: Do you know these people?