World War II vet returns to Normandy with 20 College of the Ozarks students, including Neosho woman 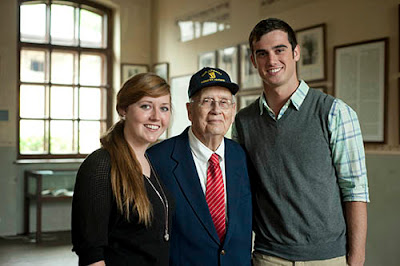 (From College of the Ozarks)

College of the Ozarks sent 20 students, along with World War II Veteran Hall Duncan, to Normandy from June 2-13 as part of the Patriotic Education Travel Program. This year marks the 75th anniversary of the D-Day landings along the Normandy coast during World War II.

During this trip, participants are visiting various sites of World War II in London, Normandy, Brussels, and Amsterdam, including numerous military sites and cultural museums.

This trip marks the College’s 11th tour to Europe, but it is the 24th Patriotic Education Travel Program trip, with previous tours representing World War II, Cold War, Korean War, and Vietnam War. The trip is under the direction of Bryan Cizek, director of patriotic activities.

“This is the 75th anniversary of the invasion of occupied France and the last major anniversary to have men who actually served in that operation to be in attendance for the ceremony,” Cizek said. “Our students realize the significance of the trip and this anniversary. It will be up to them to pass on the history of those who served and to tell their stories.”

Duncan served as a private first class in the 101st Infantry Regiment of General George Patton’s Third Army and was shot in November 1944 by a sniper as he carried a wounded American soldier to safety from the fighting near Guebling and Bourgaltroff near the German border. Duncan says he was one of the few survivors of his military company from the battles near Guebling and Bourgaltroff.

Nearly 70 years later, in 2011, U.S. Representative James Lankford pinned Duncan with his bronze star and purple heart, during a ceremony at the Oklahoma History Center.

After the war, Duncan, who was born in Oklahoma City, eventually returned to Oklahoma. Now in his mid-nineties, Duncan retired from the University of Central Oklahoma after teaching cartooning, illustration, and advertising design for 17 years. He earned his doctorate in education with an emphasis in cross-cultural communication at the University of the Witwatersrand, South Africa. After retiring in 1986, he became a full-time cartoonist, writer, and illustrator. Duncan has been published by Cambridge University, the New Readers Press in Syracuse, New York, and many other notable publishing houses.

In June of 2012, Duncan was one of the seven Veterans who traveled to Germany, Poland, Austria, Slovakia, and the Czech Republic with College of the Ozarks. He currently resides in Edmond, Oklahoma.

(Photo information: World War II Veteran Hall Duncan is traveling with the Patriotic Education Travel Program from June 2-13, to Normandy, for the 75th anniversary of D-Day. Duncan, who is a good friend of the College, has a lifetime array of artwork on display in the Ralph Foster Museum on the College campus. This will be Duncan’s second time traveling with College of Ozarks students and staff across seas.)
Posted by Randy at 1:38 PM

What a fabulous opportunity for these students. Kudos to CoO.

Actually it was the Red Army which destroyed the German Army, D-Day was a mere side-show.

We would be a lot better off if Hitler would have won. This trip is merely the delusions of cannon-fodder.