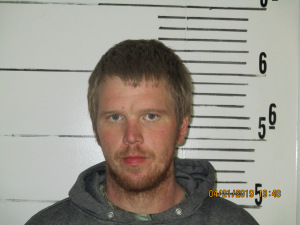 A Lamar man who was already out on bond on felony charges in Jasper County and Barton County, was arraigned Wednesday in Barton County Circuit Court on a kidnapping charge.

According to the probable cause statement, a woman who had been visiting her parents' home on 18th Street in Lamar May 1, returned to her vehicle and Matthew Clements, 27, "popped up" from the back seat.

Clements told (her) that she needed to take him to his parents' house (on Mill Street) in Lamar and if she didn't he would "damn shoot you' and told her he had a Derringer .22 pistol.

When they arrived at his parents' house, he took (the woman's) phone, as well as her key which broke and fell in the floorboard of the vehicle.

When he came back to her vehicle, she stated that he was mad because it was not running and told her to start the car. When she stated he had the keys, he became enraged and started hitting the vehicle with a metal stool, breaking the front windshield on both sides.

This is not the first time Clements has been arrested for allegedly kidnapping a woman.

The Barton County Sheriff's Office arrested him in November, after a 46-year-old woman told investigators Clements tied her up with nylon rope and duct tape and placed her in a wooden box at her home off A Highway.

That case does not show on Barton County Circuit Court online records.

At the time of the most recent alleged kidnapping, Clements was free on bond for auto theft and felony possession of a controlled substance in Barton County for felony burglary in Jasper County.

How many bonds are you allowed?

Matt needs to be locked up. He's dangerous. Twice now? Wow. Shame on our "Justice System"!

He sounds dangerous and stupid a deadly combination. He needs locked up before someone is killed.

The allegations are deplorable!

He’ll be back on the streets. Just wait and see.

Yes, sadly he will be back on the streets. I guess the judge in all his wisdom, doesn’t feel he is much of a threat. After all, he hasn’t killed anybody, YET.

I get so weary hearing about repeat offenders being given chance after chance. They must have some kind of mental disease. I don’t advocate building more prisons. I’d like to see true prison reform. Truly have rehabilitation for those that want to do better. It would probably be very expensive, but cost effective in the long run. It’s got to be pretty high dollar housing and prosecuting them. That’s not to mention the damage they do to our society.