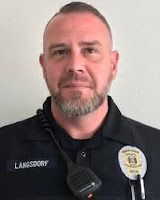 (From the office of Gov. Mike Parson)

On June 23, Officer Langsdorf was shot and killed after responding to a complaint at a Wellston business.

“For 17 years, Michael Langsdorf patrolled the streets of the St. Louis area, confronting violence and taking risks so others could be safer and the community could be stronger,” Lt. Governor Kehoe said. “Since his tragic, senseless killing, we’ve learned about the impact one individual officer can have over a career – from helping save a toddler from a burning building to mentoring and guiding younger officers. We are all indebted to Michael Langsdorf, and we will always remember the difference he made for the St. Louis region.”

Before joining the North County Police Cooperative this year, Officer Langsdorf had served with the St. Louis Metropolitan Police Department.

The flags will be held at half-staff on the day Officer Langsdorf is laid to rest.

To review the proclamation, click the following link: https://governor.mo.gov/proclamations/flags-ordered-fly-half-staff-across-missouri-monday-july-1-honor-officer-michael