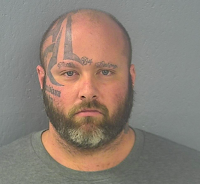 A Joplin man has admitted to running a heroin trafficking operation between Louisiana and Joplin, according to a charging affidavit filed today in U. S. District Court for the Western District of Missouri.

A December 9 preliminary hearing and detention hearing are scheduled for John J. Bourque, 36, who is being held in the Greene County Jail in Springfield without bond

When Bourque returned to Missouri, the FBI arranged with the Missouri State Highway Patrol to stop him in Newton County.

Bourque consented to a search and troopers found a black package containing heroin taped under the hood. He admitted making several trips between Missouri and Louisiana to pick up and deliver heroin.

Wow! A nice looking young man who is throwing his life away. I hope he gets help. This is his chance to change his life, I hope he makes the right choices.