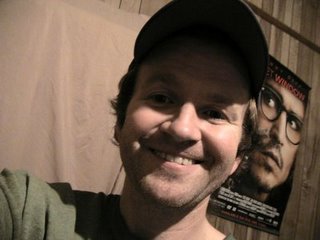 Jack Truman, the Democratic candidate for the Seventh District Congressional seat currently held by Republican Roy Blunt, continues to be a master of multi-tasking.
This week, Truman launched a MySpace site for his short film Phone Sex Grandma:

Truman's MySpace blog indicates he is in post-production on a feature-length version of Phone Sex Grandma and has also shot a feature-length documentary which he says links obesity to religion:

"Obesity: The Acceptable Sin is a film about the direct connection between obesity and religion. Director Jack Truman returns to his small hometown in the Bible belt to try to find a direct link between religion and gluttony. And through personal interviews, opinions and footage, in a down-home local style, Truman tries to open the audience's eyes to this epidemic that is happening worldwide."

Someone get this guy a campaign manager.