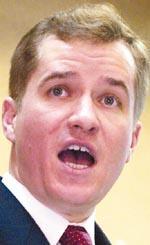 In an editorial in today's edition, the Springfield News-Leader accuses Governor Matt Blunt of hijacking government with his plan to sell MOHELA assists, most likely to contributor Sallie Mae, without having the deal go through any sort of review panel or legislative scrutiny:

And, of course, as we've written over and over again in this space, we simply believe that good government demands that the governor get full legislative approval for such a plan. We want to see the MOHELA money spent on university projects, but only after legislative approval is given to changing the student loan provider's purpose and approving the spending of the money.

Blunt and Kinder and their allies see things differently. In fact, they're so intent on making this plan happen their way that they are making new appointments to the MOHELA board at breakneck speed. It boggles the mind that in the time since board members decided not to approve the plan on Sept. 8, three of them resigned, and in no time at all they were replaced, and if Blunt has his way, they'll vote Wednesday on a complicated plan that the new board members could not possibly have a full understanding of at this point.

Gov. Blunt is a breath of fresh air. No mincing around on this issue. He really puts the "con" in "conservative"! Just as the saying goes that there are "Pros and cons" on any issue, our gov makes sure he covers the "con" side 100%. Just like his "con" partners; connivance, conspiracy, convict, conspire, contempt, convolute.

Republicans think they can pull some trick (like suddenly lowering gasoline prices around election time) and the people will forget the obscene profits.

In the same way, the MOHELA plan is simply a big pork barrel project. I have yet to hear definitively whether or not students with the loans that are sold will have to pay higher interest rates.

If so, this is especially nefarious.

Kudos to Jay Nixon for standing in the way of this nutty idea.