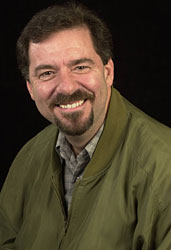 The trial for former Missouri State University drama professor George Cron's wrongful dismissal lawsuit has been scheduled for Sept. 10, 2007, according to a scheduling order filed today in U. S. District Court for the Western District of Missouri.
The trial, which will be held in Springfield, became necessary after an Aug. 29 mediation session failed to bring an agreement between Cron and the defendants in his suit.
The mediation session was part of the court's Early Assessment Program, in which cases that appear to have the possibility of being settled can be mediated in hopes of unclogging the court docket. Cron is suing dance professor, Rhythm McCarthy, who was the head of the search committee that hired him, as well as Jay Raphael, department head; Bruno Schmidt, vice president of academic affairs; John Black, Missouri State's general counsel; and The MSU Board of Governors. In addition to wrongful dismissal, Cron says the defendants defamed him.
In his lawsuit, George Cron, who has acted in such films as "Flying Tiger" and "Larva," says his problems with Ms. McCarthy began even before he was hired at Missouri State in October 1998 when she was chairman of the Search Committee which hired Cron. "(She) began to aggressively pursue a personal relationship with Mr. Cron," the lawsuit said. Cron says Ms. McCarthy helped him with his application and supported his hiring, which took place in May 1999.
After he was hired, Cron told Ms. McCarthy "that he did not reciprocate her romantic feelings and did not intend to consummate an affair," according to the lawsuit.
After that, he claims, she began "a series of actions designed to undermine (him) and ruin his reputation within the Department of Theatre and Dance." These actions, the lawsuit claims, included a series of statements about Cron's teaching methods, his fitness to teach, and his being "sexist" and "bigoted." Still, Cron was rehired each year until he came up for tenure in 2004. The Tenure Committee voted 6-2 to offer him tenure, the lawsuit said, with Ms. McCarthy and Sara Brummell casting the dissenting votes.
The committee recommendation was forwarded to Raphael, who rejected it. Cron appealed to Schmidt, who denied the appeal. On April 12, 2004, Cron appealed those decisions to the Academic Personnel Review Commission, which in a split decision, said "Cron's complaint was not frivolous." His appeal was again rejected. The case eventually went to an arbitrator, who ruled in Cron's favor July 29, 2005. Nonetheless, the board voted Oct. 4, 2005, not to extend tenure. Cron is asking for reinstatement and damages.
In court documents filed in May, the university fought back, claiming Cron had fostered an atmosphere of sexual harassment in his classes, leading to his dismissal.
The documents included a long passage written by Jay Raphael, department head, one of the defendants in the lawsuit. After praising Cron early in his statement as a "team player" who had been responsible for many "quality productions," Raphael lowered the boom.
"However, I am deeply concerned about the number of young women who have seen me each semester on every academic level to complain about Mr. Cron's judgment, his approach to teaching acting, and his respect for them as individuals. Last spring, a young woman experienced what she considered to be sexual harassment and inappropriate physical behavior from a male student in an audition for Mr. Cron's show. She did not suggest that Mr. Cron required the approach but he neither seemed to be aware of it nor did he bring it under control.
"This past semester, an entry level student indicated that she felt intimidated by the classroom environment. She also believed that Mr. Cron's reference to a 'dumb blonde' while coaching her work was not to character but rather to her as an individual. Ultimately, she risked her grade rather than to return to the class on a regular basis."
Raphael wrote that he had received many positive comments about Cron, but all of them had come from men. He said he was troubled that the complaints he had received, all of which came from female students, were about them being "treated insensitively and they were frightened."
Posted by Randy at 6:13 PM

Clearly, an arbitrator had the opportunity to hear these accusations and weigh the circumstances, context, and merit in order to make the decision in favor of Mr. Cron. Are you aware that after making all of these written accusations and innuendos, Raphael has been gone from the university for over a year? Google "mobbing" and more specifically, "mobbing in academe."

Why on earth with the Missouri State Board of Regents and the Current Administration go against the arbitrator? Why was there at least not a thorough investigation?
Why did this Board act with reckless abandon? Why would a new President allow this to happen?

Simply put the Board and the President have embarassed everyone who has every graduated from Missouri State.

They need to right their wrongs now.

Are they so backward that they are not living in the real world?
Are they instead living in a world were men are the aggressors and women are the victims? Sadly it would appears so.

It seems that they do not read the papers, and see the numerous sexual attacks on minors that are female aggressors. Even actor John Vaught sued a woman for sexual harassment. The 2lst century female is a complex individual All you need do is go to the profiles on My Space, etc.

The President and the Board need to wake up and realize we live in different times. Your attitude is far outdated. In fact it is perhaps prejudicial towards both men and women Women should be seen as equal to men, in all ways. Not just the good.

Missouri State does seminars from time to time on harassment, perhaps it is time that they do one called "THE WOMAN AS THE AGGRESSOR". Men young and old alike need to know their rights in relationship to unwanted sexual attacks and insinuations. Men too often joke about this -- but it can become serious and threatening when a man does not return the affection. We have not totally reached equality and so often the female sees the male's rejection as refusing a valuable gift (This is especially true of older women in McCarthy's age range)

In conlcusion, I strongly urge the Administration to move Missouri State into the 2lst Century, and not fall prey to an outdated mode of thinking that true feminist have long abandoned

Perhaps these tenets had their place at one time, but now too often they are only used as tools for abuse and agenda pushing.